One suspect is in jail while the other has been released 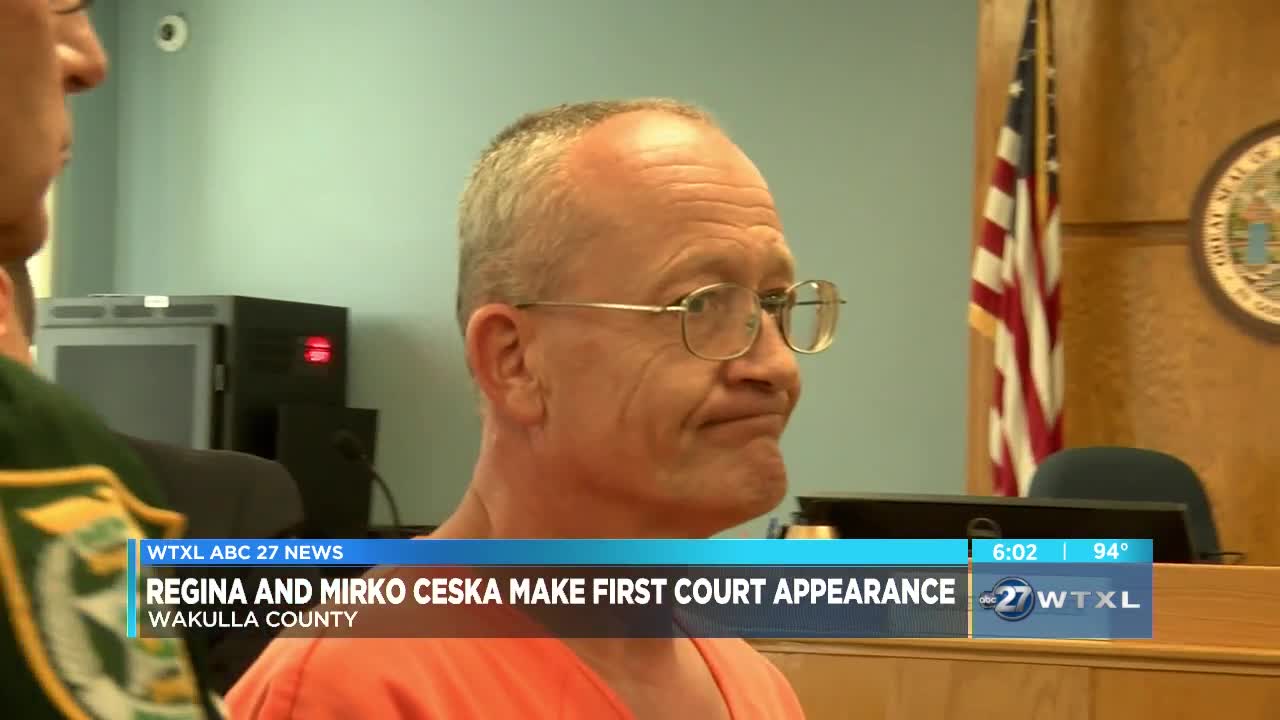 The women called Regina and Mirko Ceska "doomsday preppers." Now, one of the accused is returning home while the other will have to wait in jail a little longer.

A Wakulla County Judge granted pre-trial release to Regina Ceska because she's only being charged with 2nd degree misdemeanors.

Regina Ceska will have to wear a GPS monitor and she can't contact the victims or her co-defendant, her husband Mirko Ceska.

The couple requested their first appearances be done in person.

But Mirko Ceska's attorney wasn't available to make it to court. That's why he's going to have to wait a little longer before a judge decides to release him.

The Ceska's two sons and their wives were in court to support their parents. Mirko is accused of abusing their adopted daughters, while Regina is accused of neglect and failure to report.

Mirko and Regina Ceska lived in Crawfordville with the victims after adopting them when they were 11 years old. Trees cover most of the property, making it even harder for anyone on the outside to know what was going on inside.

Reports say the girls were physically abused, with markings to show for it. There was even sexual abuse going on inside the home.

The victims described Mirko and Regina as doomsday preppers who had getaway properties located throughout the United States and food rations and weapons stored in the event of a major calamity.

They told Wakulla County deputies that they were up daily taking care of the pigs and sheep, even using a loom to sow wool they had to sheer.

They say they had to appear happy in public, but couldn’t speak to anyone. If they didn’t smile, they would get punished.

They described a variety of punishments to deputies including verbal abuse, restricting their food intake, and beatings. Both victims also described episodes where Mirko would force sex acts upon them, some with the support of Regina.

After 10 years, those girls escaped July 1.

Prior to their arrest, the Ceska's met with former Governor Charlie Crist to speak out about foster children being medically abused. They said their daughters were taking too many medications when they began the fostering process.

Mirko Ceska will be back in court Wednesday morning at 10 a.m.

A Wakulla County couple has been arrested after being accused of physically and sexually abusing multiple victims.

Mirko Ceska, 58, and Regina Ceska, 55, were arrested by the Wakulla County Sheriff's Office on Friday.

On July 1, two victims reported to WCSO that they had escaped from Mirko and Regina, who had custody of them, a couple days earlier after being physically and sexually abused for years.

The victims described Mirko and Regina as doomsday preppers who had getaway properties located throughout the United States and food rations and weapons stored in the event of a major calamity.

The victims stated they had been trained to raise pigs, raise sheep, grow various fruits and vegetables, sheer sheep, utilize a loom, and sew. They also told deputies that they were used as farm labor and began each day at 5:30 a.m.

They described a variety of punishments to deputies including verbal abuse, restricting their food intake, and beatings. The most recent beating was reportedly done by Mirko with a metal rod. Detectives noted marks and bruises on one of the victim’s back and arm.

Both victims described episodes where Mirko would force sex acts upon them, some with the support of Regina.

During the search, large quantities of food rations and survivalist items were found. Detectives seized dozens of high quality firearms and many cases of ammunition from throughout the house.

Some of the firearms were hidden behind false walls or a staircase.

A homemade video was also found, which showed an event where Mirko had his face very close to both victims’ faces and was screaming that they had stolen food. Detectives executed a search warrant on a cell phone belonging to Mirko Ceska as well, where they found a file containing an internet search history for an incestuous video.

Both were booked into the Wakulla County Jail and the investigation is ongoing.