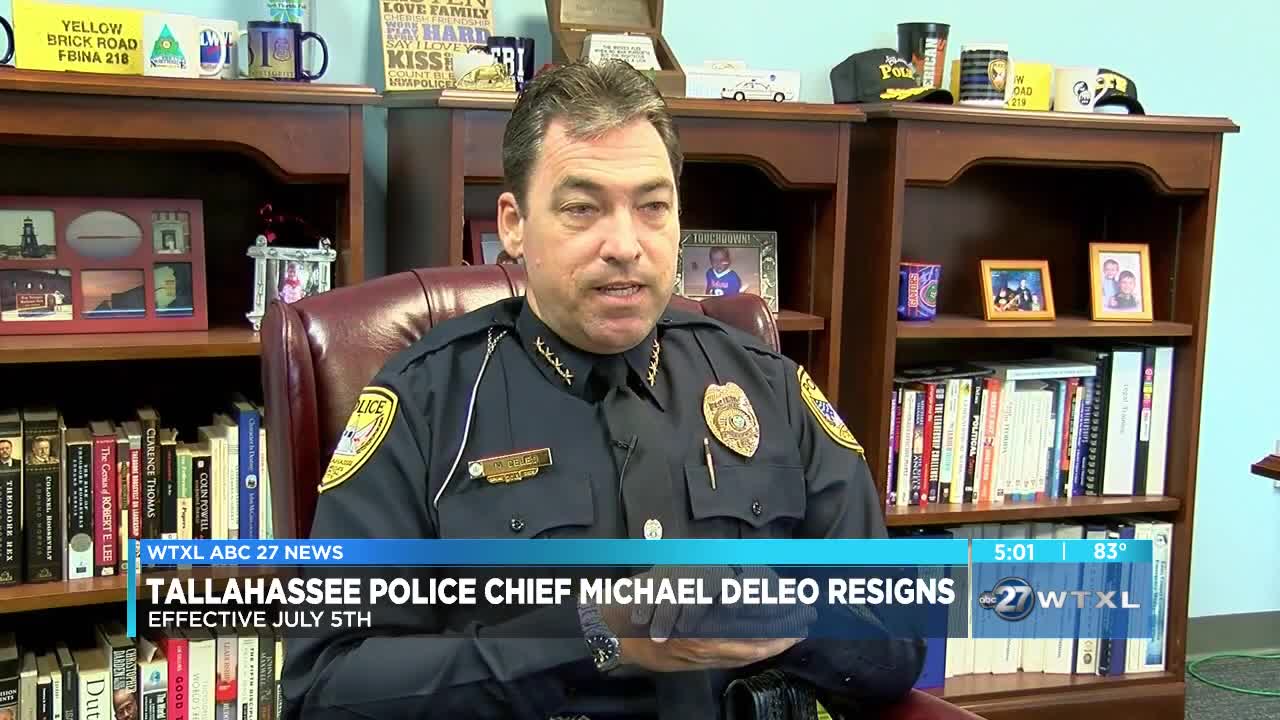 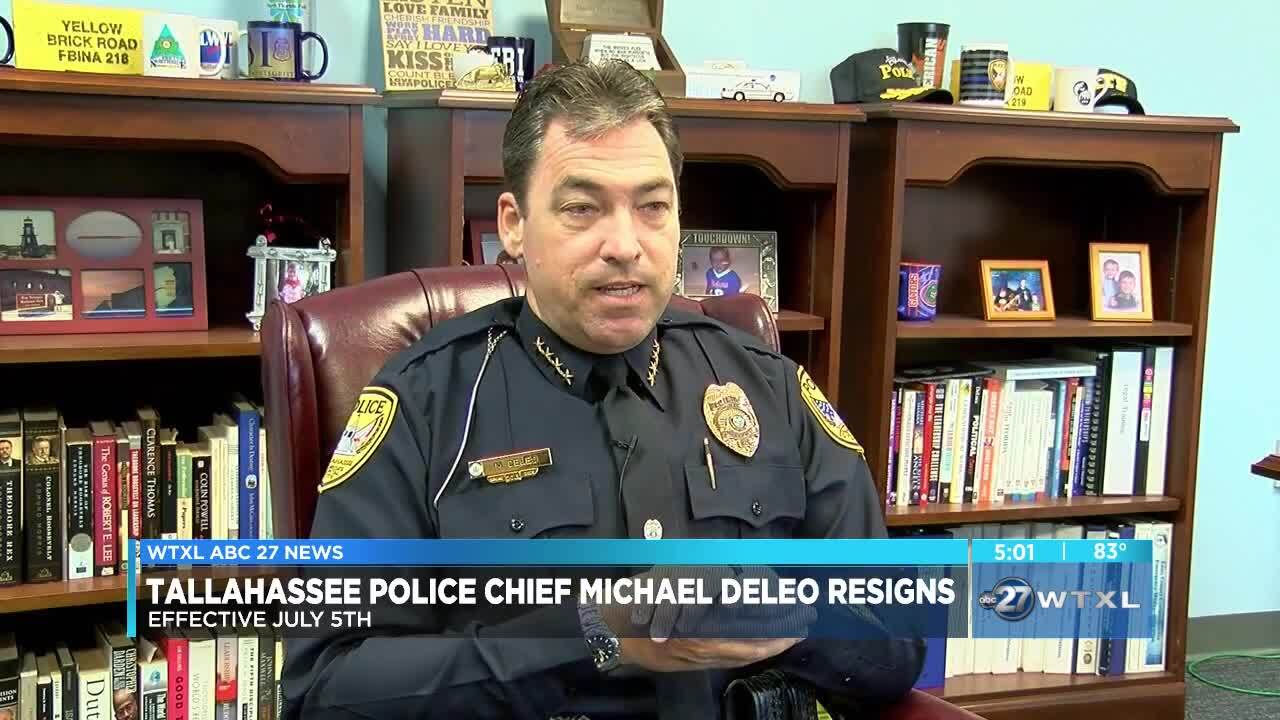 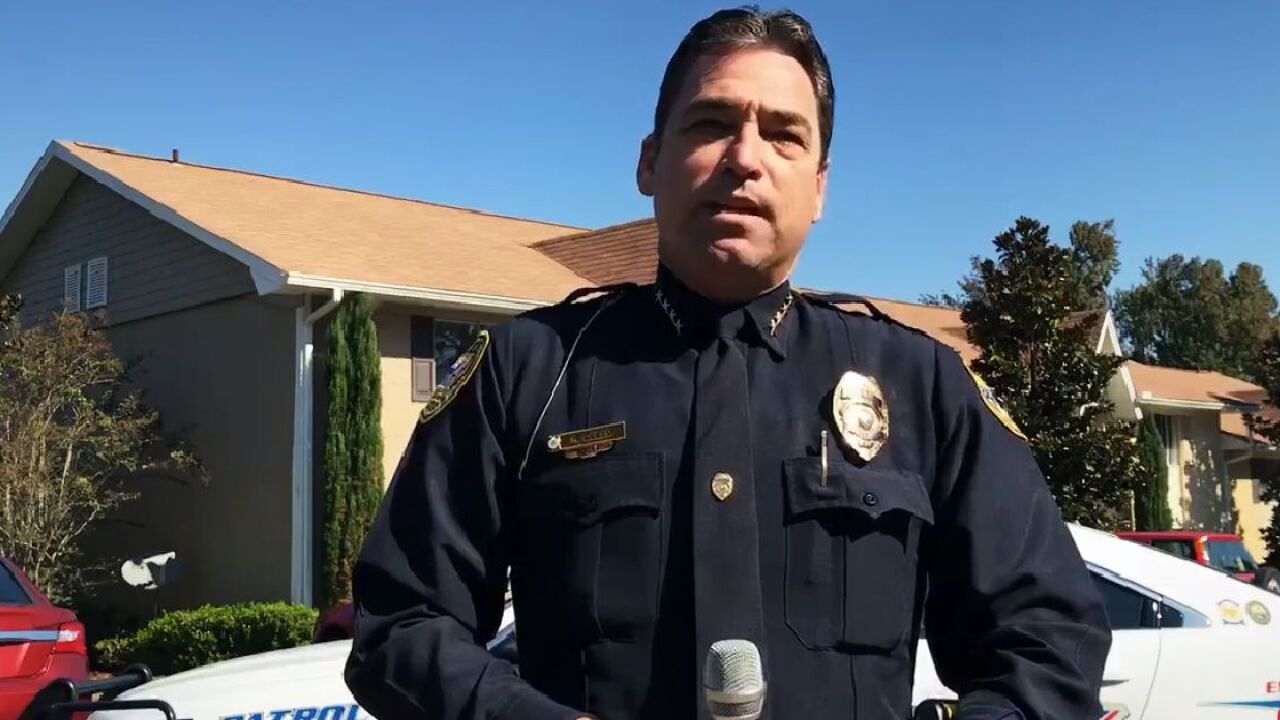 He talks about the changes that have been made to the department in that time, the relationships built in the community, and it answers the question that so many are probably wondering-- why?

DeLeo's letter says that he will be addressing criminal justice and homeland security challenges on a national scale.

The letter goes on to talk about the decrease in violent and property crime throughout the city since 2015.

It also goes into detail about the many community programs and recognition that he and his department received in that time.

City Manager Reese Goads says that Tallahassee Police Department will continue to build onto the foundation laid by DeLeo.

Now DeLeo's time as chief has not been without controversy. Just a few weeks ago, an arbitrator ordered a fired officer be given his job back after allegations that Chief DeLeo wrongfully fired him.

Tallahassee Police Chief Michael DeLeo has announced that he is resigning after spending nearly six years as chief.

TPD spokesman Damon Miller confirmed to WTXL that the chief announced his resignation to the department on Wednesday.

DeLeo's last day as chief will be on July 5.

As of now, we have not confirmed a reason as to why Chief DeLeo has chosen to resign.

"I am extremely proud of the Tallahassee Police Department and the work that has been accomplished over the last five and a half years, but I have been presented with the opportunity to address criminal justice and homeland security challenges on a national scale while having additional time with my family," DeLeo wrote in a resignation letter submitted to city manager Reese Goad.

Touting a 28 percent decrease in violent crime since 2015 and the second lowest crime rate in more than 20 years back in 2018, DeLeo says that he has enjoyed his time as chief and looks forward to the department's future. You can read his full resignation letter below.

According to Goad, a nationwide search will begin immediately to permanently fill the position. In the meantime, he says Major Steve Outlaw will begin serving as Interim Chief on July 6.

He sent the following statement to WTXL:

I would like to thank Chief DeLeo for his five years of public service to the citizens of Tallahassee. During this time, many strides have been made to enhance public safety, including the implementation of a variety of community oriented policing strategies and citizen focused initiatives. The department recently received international recognition for its leadership in community policing and efforts toward inclusive community collaboration.

This community policing philosophy provides a solid foundation for the department as officers uphold TPD’s core values of trust, loyalty and commitment. Serving the Capital City since 1841, the department has a distinguished history, serving as the third oldest law enforcement agency in the United States. When formalized local public safety efforts began nearly 200 years ago, a single night watchman was tasked with keeping the peace. Today, it takes 410 sworn officers, 125 non-sworn members and a host of temporary and volunteer civilians, along with a $59 million budget, to ensure citizen safety. As the longest nationally accredited agency in the country, TPD is a national leader, one that continues to evolve by integrating modern policing approaches and strengthening community relationships.

Moving forward, TPD will build on its successes and remain a model agency. I would like to thank all the TPD officers and employees for faithfully serving this community. The action of any police officer can impact an individual for life and a community for generations. The loyalty and dedication of our officers are unwavering, as is our support for them.

Chief DeLeo's first day on the job was on January 6, 2014. DeLeo replaced former chief Dennis Jones who retired early in September 2014 amid on going controversies including the handling of a suspected drunk driver.

Prior to his postion at TPD, DeLeo spend more than 20 years in law enforcement with experience with the Plantation Police Department in Plantation, Florida. He served as Deputy Chief, second in command, and in charge of the department's day-to-day operations before being promoted to Chief.