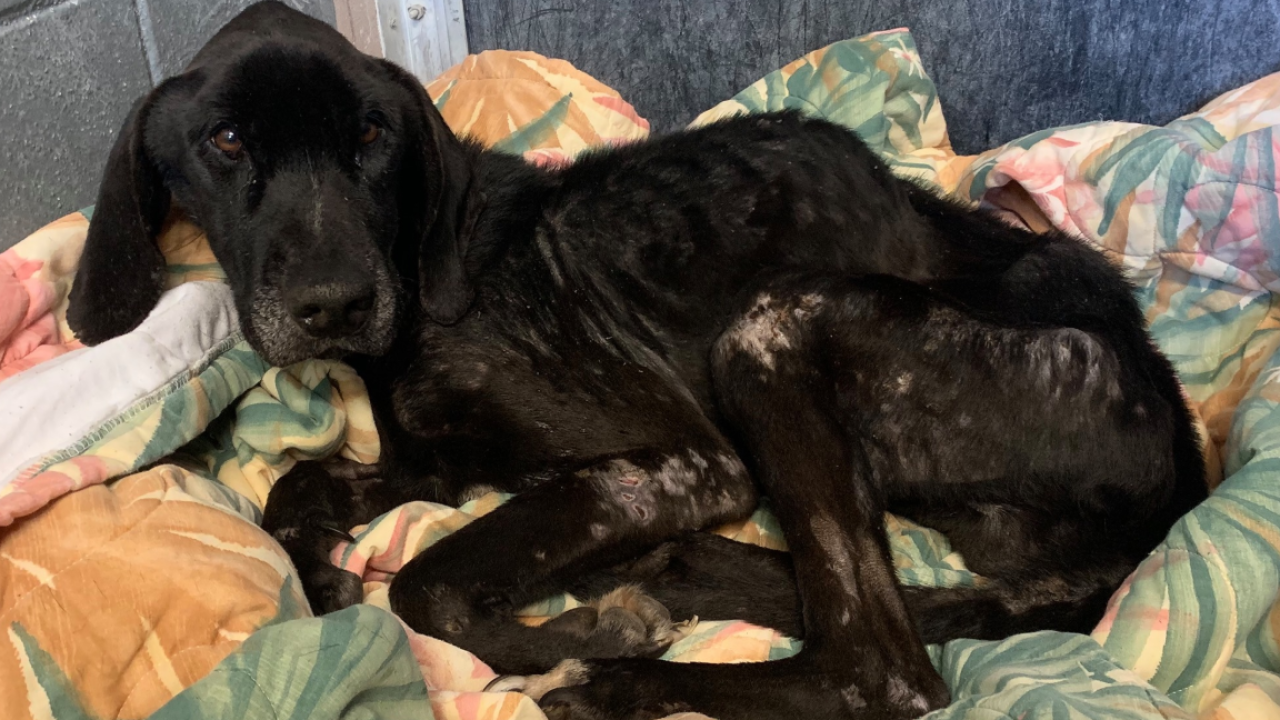 APALACHICOLA, Fla. (WTXL) — A 40-year-old Apalachicola man is facing felony charges after his emaciated lab-mix had to put down due to severe lung and heart damage.

Reginald D. Giddens, 40, was arrested on Feb. 13 for animal cruelty/neglect.

According to the Apalachicola Police, officers went to Gidden’s home in the 300 block of 22nd Ave. on Jan 25 after an anonymous report of animal cruelty.

When they arrived, they saw an undernourished, black dog tied to a rope under a boat. According to the police report, the dog’s ribs and spine were visible, and he was unstable on his feet.

Officers said they then asked Giddens to explain the condition the dog was in.

Giddens told APD that a week earlier he heard Jed, or Lazarus as he was also referred as by the Franklin County Humane Society, “hollering,” and that the dog “had been out in the woods behind the cemetery.”

According to the report, Giddens also said that the following morning “the dog’s neck was swollen and the dog could not walk.” He also stated he believed Jed had been bitten by a snake.

When officers asked Giddens if he had taken Jed to a vet, Giddens said he had not because he was treating his dog on his own, and told police Jed was “doing much better,” despite his visible condition.

The arrest report also says officers questioned Giddens about Jed’s weight and were told he fed his dogs "at least two to three times a day.”

Officers then called animal control, who wanted the dog examined by a vet. The report says Giddens then released Jed to Animal Control.

According to APD, animal control transported Jed to Apalachicola Bay Animal Clinic, where he was examined by a veterinarian.

The doctor gave Jed antibiotics, a blood transfusion and began heart worm treatment. Even after weeks of intensive care, officers said Jed’s “prognosis was hopeless” and the staff had to euthanize him on Feb. 10.

The autopsy revealed Jed’s heart and lung damage was due to extreme heart worm disease and kidney disease. According to APD, the doctor who examined Jed before he was put down said he had never encountered an animal in such condition.

“In my professional opinion,” said doctor said in his full report, “this is one of the worse cases of neglect I have seen in 38 years of practice. This dog suffered and died from multiple, easily preventable conditions.”

The arrest report also said the doctor recommended Giddens’ other pets be seized and re-homed and that he should not own any more pets.