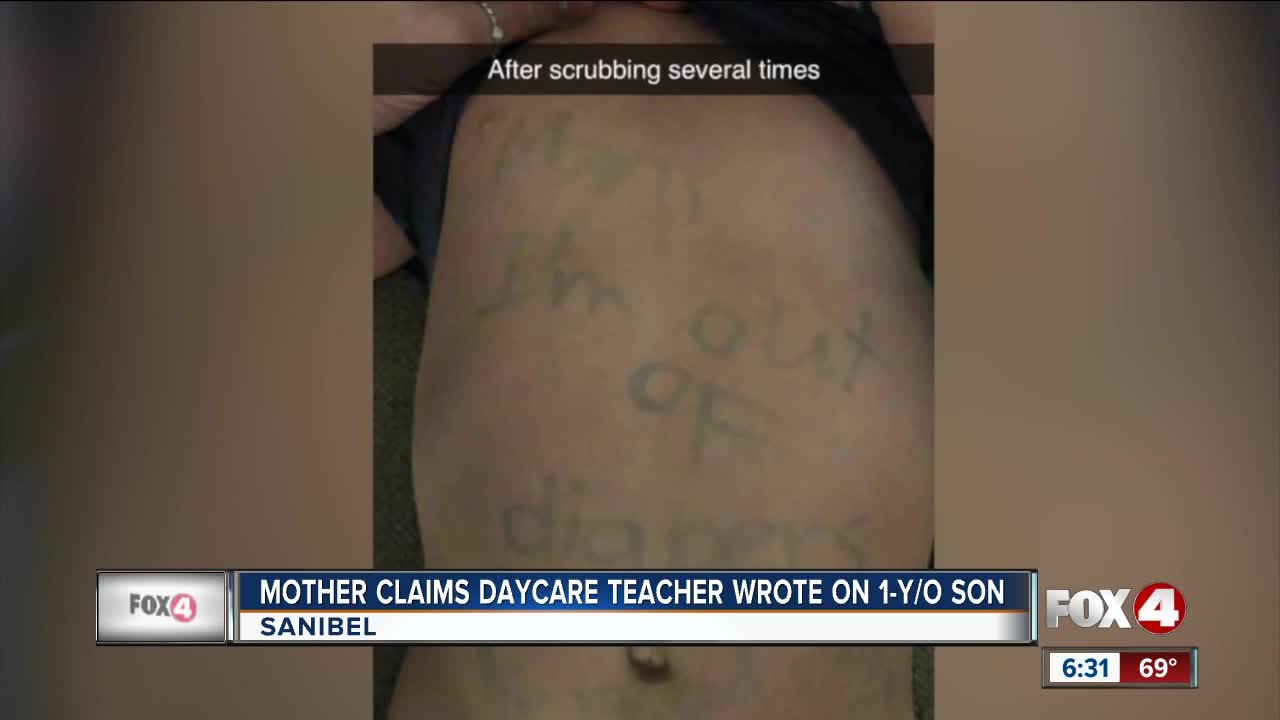 A Sanibel mother is outraged after her 1-year old son’s daycare teacher wrote on him with a marker to remind her to bring more diapers.

A Sanibel mother is outraged after her 1-year old son’s daycare teacher wrote on him with a marker to remind her to bring more diapers.

Heather Chisum first noticed the writing on her son Milo when she went to change his diaper after picking him up from the daycare.

“I was just outraged. I was really upset, I felt like, you know, it was unwarranted physical contact with my one-year-old,” said Chisum.

Chisum says when she would pick up her son Milo from The Children's Education Center of The Islands, she would always find a daily report paper in his lunch box, letting her know how he did and if he needed more diapers.

However, yesterday, after she missed reading a recent report, she found the memo written across her son's belly instead of a piece of paper.

“I was mainly upset it was written so far down his torso that his diaper comes above it, so that's upsetting to me that he was naked when he was written on," said Chisum.

The memo read, “mom I’m out of diapers pls read my report," written with what appeared to be a marker.

Chisum says even after bathing Milo twice and scrubbing several times, she has not been able to remove the writing from his skin completely.

“I wasn't given a phone call, an email, a text message, and I wasn't verbally told he needed diapers, it's not like they had been hounding me for weeks," said Chisum.

Chisum says this is not the first time this has happened since enrolling her son Milo into the daycare — it also happened back November.

“I thought it was an isolated incident, and I could be quiet and nothing would happen again, but it happened again,” said Chisum.

This time she took to Facebook seeking advice from other parents. Since then, her post has gone viral, getting tens of thousands of shares and reactions, plus encouraging comments to speak out.

“I had so many moms telling me to do this because there are so many moms who do have issues and don’t say anything,” said Chisum.

Chisum did take her concerns to the daycare, who has since terminated the teacher involved in the incident.

In a statement, the daycare said:

"We are aware of the incident at the school, and we are terribly sorry for the distress it has caused the family involved as well as all of our families. It was a breach of our professional ethics on the part of the teacher. The school has taken immediate action to remove the teacher from the school. We are reviewing protocols already in place to ensure that nothing like this occurs again. We are proud of our school, love our students, and are eager to make our school a better place as we move forward.

"It's nice to know it won't be an issue occurring again," said Chisum.

Chisum has since removed her 1-year-old son from the daycare and her 3-year-old daughter, who was also enrolled. Chisum says she’s unsure on what her next step will be as far as child care since there are few options on the island.