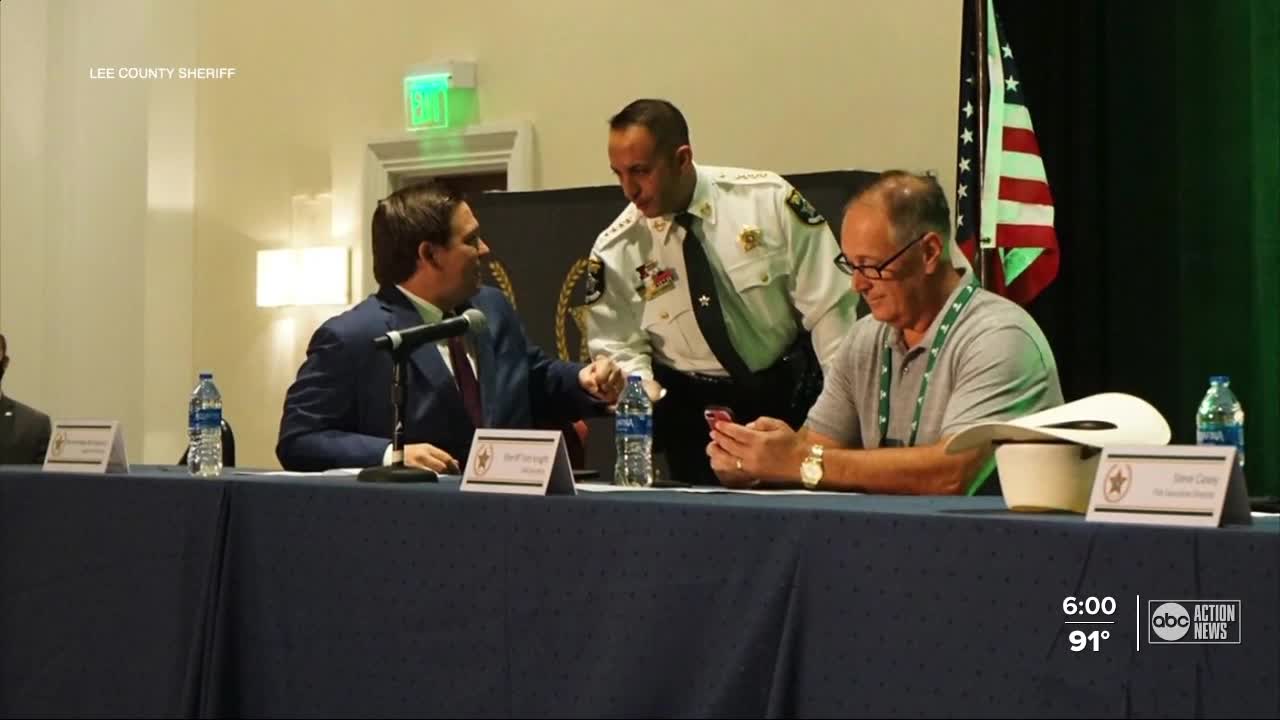 At least five people who attended a three-day conference for Florida sheriffs last week have now tested positive for coronavirus, the I-Team has uncovered. 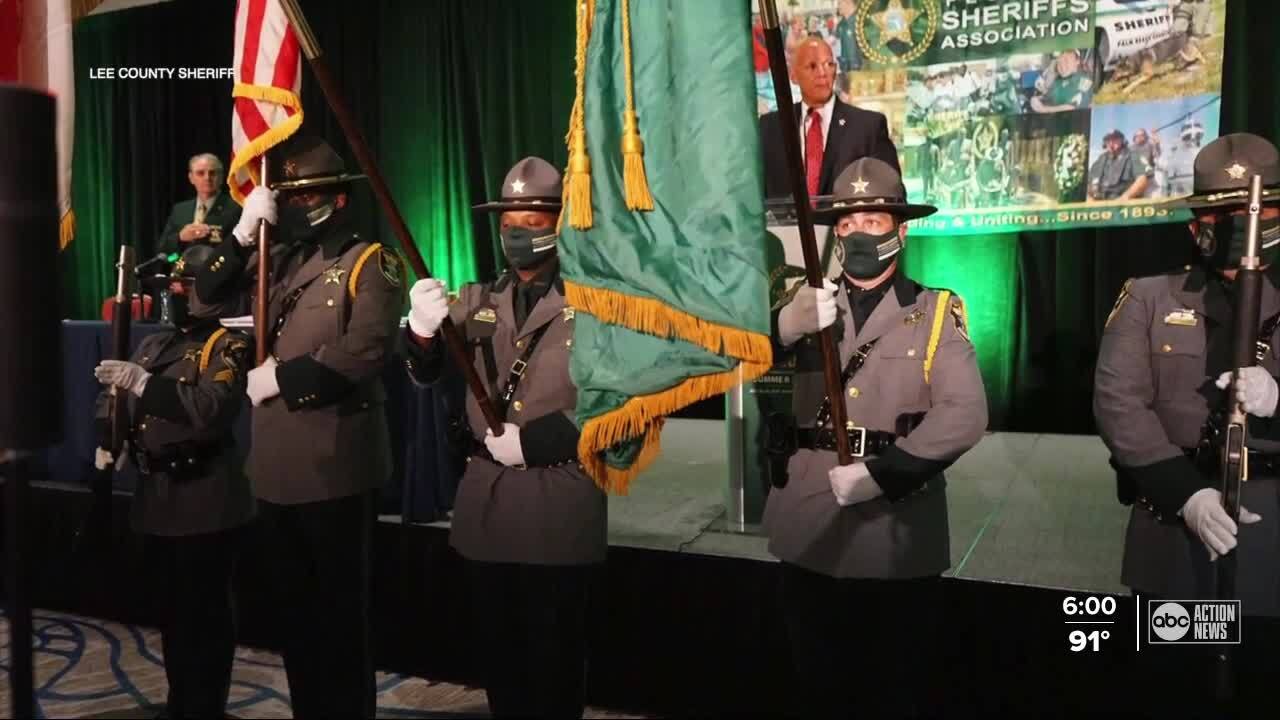 Among those in attendance were Gov. DeSantis, who was seen in a photo at the event speaking to Lee County Sheriff Carmine Marceno while neither of the men wore masks.

Moody also spoke at the conference and posted on her Twitter account: “Honored to join sheriffs from across FL today, at a social distance of course…”

But Moody later posed for a photo (pictured in the middle) without a mask with Gilchrist County Sheriff Bobby Schultz (pictured next to Moody on the right), who announced Monday that he and two of his staff members tested positive for COVID-19.

Florida’s Department of Corrections Secretary Mark Inch and his deputy, Ricky Dixon, also announced they tested positive after the conference.

Inch, according to the Department of Corrections, was at the conference to speak about working to mitigate the spread of COVID-19 in jails and prisons.

Volusia County Sheriff Mike Chitwood said he tested positive for the virus after the conference. Back in April, he appeared in a public service video sponsored by the Florida Sheriffs Association posted on its website, saying, “I'm going to remind all Florida residents to heed the advice of the CDC. Social Distancing... stay at home.”

In a Facebook posted on Tuesday, Chitwood posted that he suffered from a headache as well as “nausea, vomiting, fever, chills and lack of sleep” as a result of coronavirus.

The sheriffs association said a fifth attendee tested positive after the conference but did not identify that person.

Days after the conference, President Donald Trump flew into Tampa and was surrounded by some of the sheriffs who attended the conference.

Lee County Sheriff Carmine Marceno stood behind President Trump as he spoke. Marceno was not wearing a mask as the event.

Marceno’s staff said he tested negative for COVID-19 after the conference.

A spokesperson did not address questions about photos of her at posing at the conference without wearing a mask, but released the following statement:

“As soon as the Florida Sheriffs Association notified us of potential exposure, Attorney General Moody immediately was tested for COVID-19 and tested negative. Due to significant challenges currently facing law enforcement, it was important for General Moody as the Chief Legal Officer of the State of Florida to attend this meeting.”

A spokesperson for the Florida Sheriffs Association declined an interview for this story but issued a statement saying:

“The Florida Sheriffs Association, and the hotel, took every precaution leading up to the business meeting, including reducing the number of participants by 75 percent, eliminating the trade show, requiring participants to wear masks in common areas of the hotel, individualizing food service, ensuring indoor air was filtered, cleaning surfaces throughout the day, etc. The meeting was in compliance with CDC, state, and county guidelines, as well as hotel policy relating to such events.

The day after our meeting (on Wednesday), one attendee contacted us to share they were COVID positive. FSA provided notice to all participants the same day, and that attendee also personally called anyone they interacted with at the meeting as an additional notification measure.

As has been reported between Friday and today, two sheriffs and two Department of Corrections leaders have issued statements about positive tests. We had approximately 60 attendees in the meeting, mostly sheriffs. We don’t keep or share an attendee list; no FSA staff members are feeling ill or have tested positive.”

The I-Team also reached out to Gov. DeSantis and the governor's office released the following statement:

"There is no indication that Governor DeSantis came in close contact with the individuals who have since tested positive for COVID-19. As the Governor noted during a press conference yesterday, he is tested regularly and does not have nor has had any symptoms."

If you have a story you think the I-Team should investigate, email adam@abcactionnews.com.