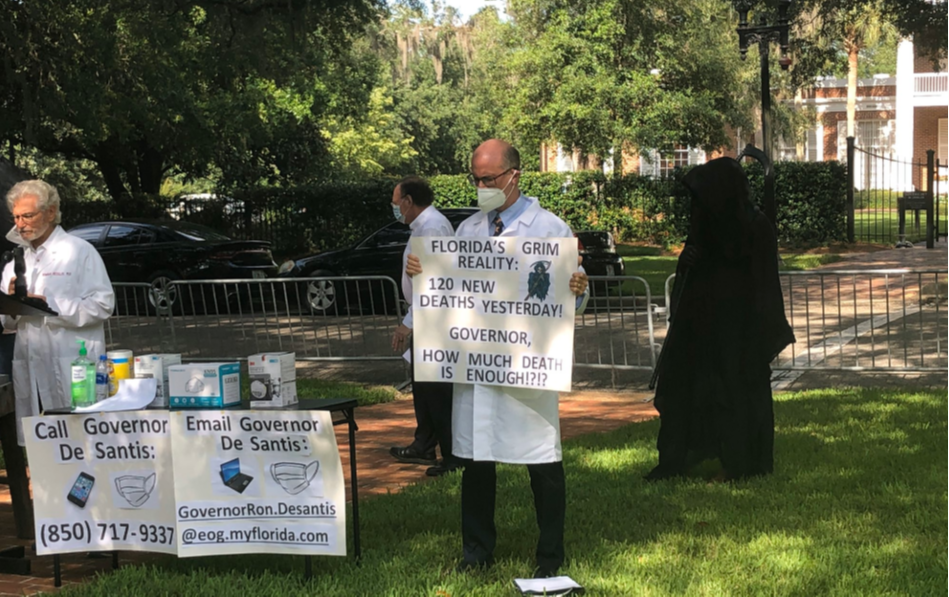 A group of doctors gathered outside of Governor Ron DeSantis' mansion on Friday demanding a statewide mask mandate.

The Physicians for Social Responsibility is the group behind Friday's protest. They say the government response to COVID-19 has been chaotic and irrational.

“We are whistling past the graveyard," one of the doctors said. Among the doctors were Dr. Howard Kessler, Dr. Ronald Saff, and Dr. Donald Axelrad.

There’s a coffin and someone dressed as the grim reaper out here. That sign asks @GovRonDeSantis “how much death is enough?” @abc27 pic.twitter.com/GpNxl1zxDx

Daniel Uhlfelder, who went viral a few months ago for visiting Florida beaches in a Grim Reaper costume, made an appearance Friday. He called out the governor, saying that DeSantis was handling the pandemic irresponsibly.

@DWUhlfelderLaw is dressed as the grim reaper. Says @GovRonDeSantis is irresponsibly handling the coronavirus. @abc27 pic.twitter.com/x7OjbiljgW

"We need an 86 percent immunity ratio to achieve herd immunity.," said Axelrad. "Do you really think voluntarily we're going to get 86 percent of the people to wear a mask?"

They also started a petition urging the Governor to issue a statewide mask mandate. So far more than 1,000 physicians statewide have signed.

"They're having me use a pulse meter that tests the oxygen levels in the blood," Cottingham said. "When I visit the doctor, they're having me do breathing exercises and listening in. Obviously it has worked."

Cottingham says his recovery has gone smoothly, but 62 people still remain in hospitals in Leon County due to COVID-19 and the lasting effects of the virus could be different for every patient.

"What this condition does is it seems to activate the clotting system," said Saff. "A lot of patients are developing clotting in their kidneys and brain. That can cause strokes and neurologic dysfunction."

Those physicians also urged the Governor to revisit his stance on children returning to school asking for a mask requirement and protections for students in August.