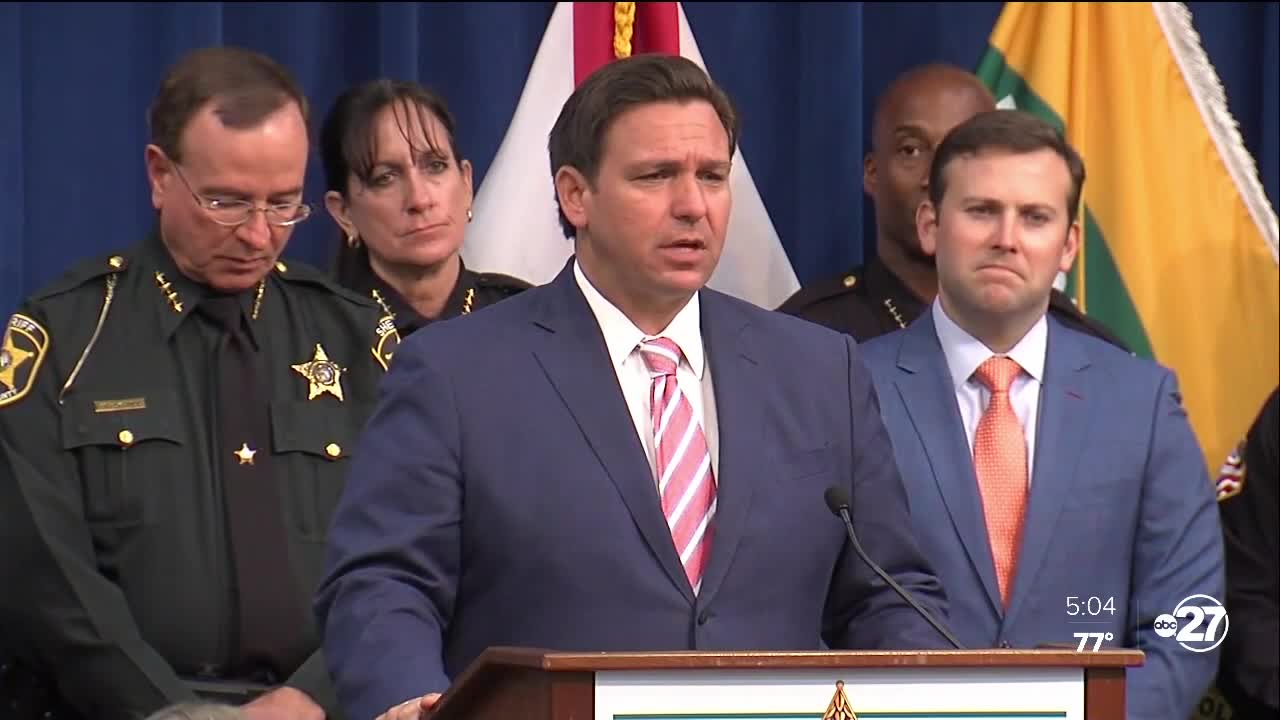 Gov. Ron DeSantis introduced a new bill on Monday that would increase penalties to a third degree felony for those who participate in "disorderly assemblies," block roads and damage monuments.

TALLAHASSEE, Fla. (WTXL) — Gov. Ron DeSantis introduced a new bill on Monday that would increase penalties to a third degree felony for those who participate in "disorderly assemblies," block roads and damage monuments.

In Winter Haven, alongside several law enforcement leaders from around the state, the House speaker and the Senate president, DeSantis said that the bill aims to crackdown on riots and "antifa types."

Under the bill, called the Combating Violence, Disorder, and Looting and Law Enforcement Protection Act, it'd be a third degree felony when seven or more people are in "an assembly and cause damage to property or injury."

Calling it the "boldest and most comprehensive piece of legislation" like this in the country, DeSantis said there will also be enhanced penalties for people who throw objects or assault law enforcement officers during assemblies.

"If you are involved in a violent or disorderly assembly and you harm somebody, if you throw a brick and hit a police officer, you're going to jail," DeSantis said on Monday.

The governor said anyone who strikes a police officer could face a mandatory minimum jail sentence of at least six months, and won't be granted bail before your first appearance in court.

"If you can do this and get away with it, then you're gonna have more people do it," DeSantis said. "If you do it and you know that there's gonna be a ton of bricks rained down on you, then I think that people will think twice about engaging in this type of conduct."

DeSantis also announced that he was taking action to prevent any Florida city from "defunding" the police, saying that any municipality that does so will get state funding and grants withheld.

The governor emphasized that the measure is the priority for the upcoming legislative season. He expects an early 2020 session floor vote.

You can read more on the three components that make up the bill below: