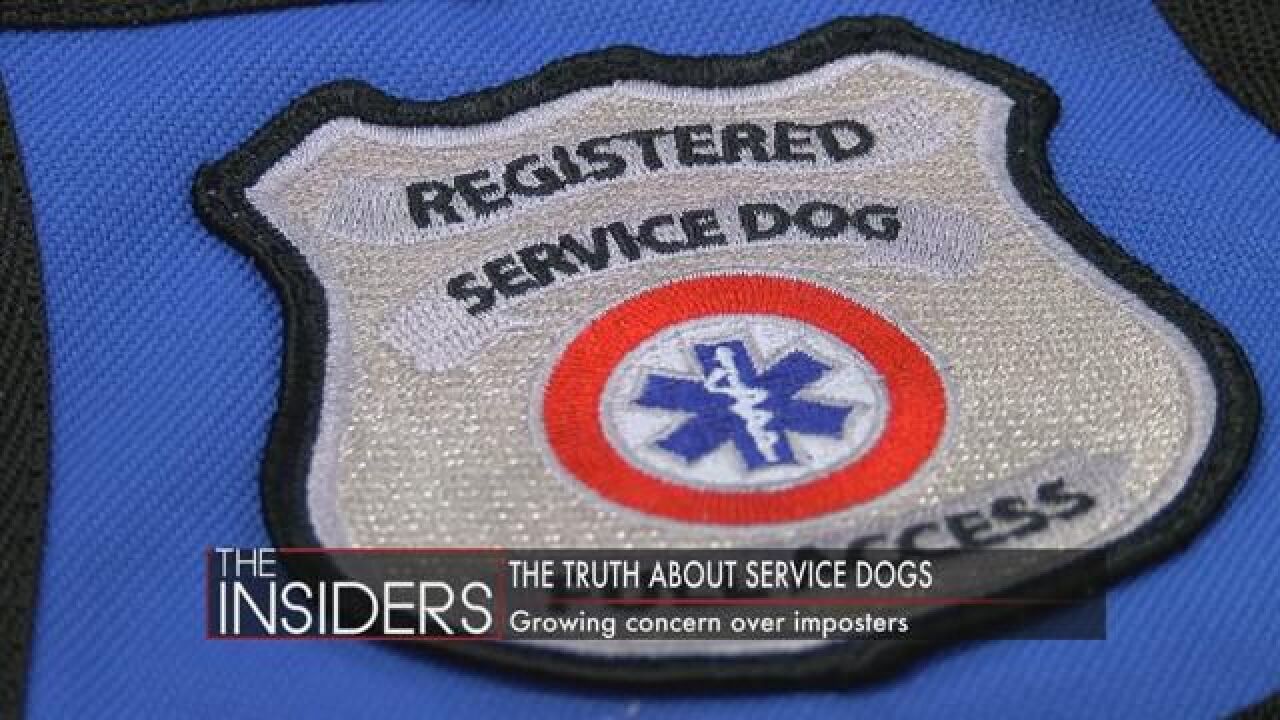 TALLAHASSEE, Fla. (WTXL) - For people with disabilities, service dogs provide much-needed help to get through every day. But some say there's a growing problem with impostors with little or no consequence.

When it comes to service dogs, it's often tough to pick out the real deal from the fakes. You don't need any documents and legally, you can't ask for the dog to perform a trained task.

In many cases, these dogs are lifesavers but fake service animals are giving them a bad name.

Meet Phoenix. He's being tested to detect low blood sugar. Phoenix does this exercise hundreds of times, sniffing a saliva sample of a type one diabetic.

Barbara White-Willner has been training service dogs in Tallahassee for ten years.

It's what helps make a service dog different from a pet: the specific training and discipline to work with those that need them.

"They go on airplanes. They go in restaurants. They go to grocery stores, they go to malls, they go everywhere, just to get them ready," said White-Willner.

Under the Americans with Disabilities Act or ADA, service dogs are welcome in all areas of a facility where the public is normally allowed to go, an incentive for some pet owners to bend the rules.

"It's very, very disheartening and disrespectful to the people that really need these dogs versus the people that are cheating just to see if they can get Fufu into a restaurant or a free seat on an airline," said Carol Holden, the CEO of Guardian Angels Medical Service Dogs.

People have posted pictures of imposter dogs on social media, sharing stories of how others try to get away with faking it.

"I see them...on the bus a lot," said Leea de Ruijsscher, a Facebook commenter. "Was very close to being bit when one popped out of a picnic basket."

"I have had several people come into stores and have their fake service dogs attack my legitimate service dog," said Brittany Tyler, another Facebook commenter. "One day, I'm afraid they won't be able to hold their dogs back, and I am going to lose my lifeline."

"Our dogs have been attacked by impostor dogs, and that can have very serious psychological consequences to a working dog," said Holden.

In 2015, the State of Florida started penalizing those who have fake service animals with up to 60 days in jail, a $500 fine, and community service.

"I think it's a step in the right direction," said White-Willner. But no one we talked to could recall an instance when the law was actually enforced.

"The problem is that business owners just don't know what their rights are," said White-Willner.

"If you have a dog that comes into your place of business and is posing a threat to your customers, damaging your merchandise...or just behaving inappropriately, you have the right to have to ask that team to leave," Holden asserted.

Phoenix is a diabetic alert dog, which helps detect high and low levels of blood sugar. To train a dog like this takes considerable time.

"These diabetic alert dogs that I'm training have been with me a year and a half, and they're just now starting to be ready to go," said White-Willner.

"They're so essential to the people that need them that service animals are just a gift," said Belinda Rodebaugh.

Rodebaugh had service dogs when she had diabetes. One night, her blood sugar was dangerously low while she slept, prompting her dog to act fast.

"She was standing over me, and her face was about this far in front of me -- and she just breathed on me, like, 'Wake up, wake up, wake up,'" Rodebaugh explained.

Rodebaugh says her husband was out of town and that her dog helped her get up and find a sugary drink.

"Had she not been there, my husband might have walked in a day or two later and found me either unconscious or dead on the floor," Rodebaugh said.

It's that type of situation where service dogs show they're authentic, but those who want to take advantage of the label can do so with no problem.

We went online to find a service dog vest for ourselves with no proof of a dog or disability. All we needed was a credit card number, where to mail the vest, and an email address. 50 bucks later, our vest came in the mail, specifically labeled for a "Registered" service dog.

"It's a horrible scam, because people think that there are actual, legitimate registries," said Holden.

So, if there's no way to document a service dog, how can you tell if it's a fake?

"The two things they can ask is, 'Is this a service animal?' -- which, of course, most people are going to lie," said White-Willner. "But, you can also ask, 'What task does this dog do for you that you cannot do for yourself?' And most of the time, if the animal is fake, they don't know what to say then."

"That dog must also always be reinforced," said Rodebaugh. "It's not a, you know, every five-year thing. It's an every year, every few months, sometimes monthly, depending upon the dog."

"Our dogs are trained to be invisible, if you will, when they are not actually performing a task," said Holden. "So, they're always within one foot of us, never at the end of their leash, tripping people, sniffing people. They're not allowed to do those things."

Service dogs help people with several types of disabilities and disorders, including veterans with PTSD, children with epilepsy, and the visually impaired. With impostor dogs and their handlers breaking the law, some say it's a slap in the face to those who really need these animals with them

"You're making their life more difficult when you bring a dog in that really doesn't need to be there," said White-Willner.

"If you're that person out there abusing the service dog laws, I pray that you never have one of those situations that would take life as you know it away from you to where you would have to have one of these service dogs," said Holden.

Experts say it's the training that really identifies a true service dog and that comes at a big price: anywhere between $10,000 and $20,000. Most service animals are trained very young, so they can serve their handler for as long as possible.

If you have a story idea for the Insiders, you can email us at abc27news@wtxl.tv with the subject line, "Attention The Insiders."