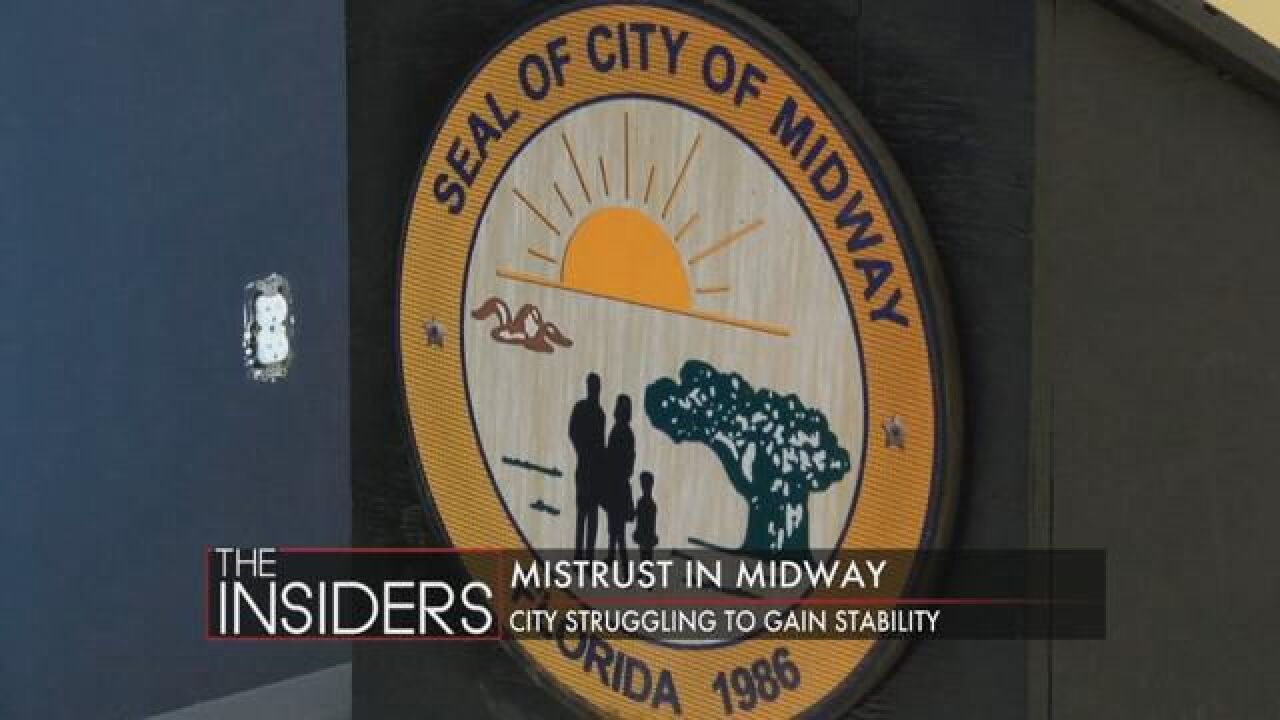 MIDWAY, Fla. (WTXL) - Every city has it's ups and downs and for the City of Midway, some feel they're on a downward slope to nowhere.

It's been a rough year, from a police chief being fired, rehired, and quitting, to some residents asking the question, "Should we give up being a city?"

Midway became a city in 1987 and former city leaders and council members tell WTXL, for a while, things went pretty smoothly. However, over the past decade or so, resident unrest, legal problems, and employee shakeups have plagued the city and some taxpayers say, they've had enough.

"I'm tired of knowing that Midway is being used a as a platform of what not to do," said Nandrycka King Albert, a Midway resident.

King Albert has lived in Midway for 10 years. In that time, the people in charge have changed, but she says the issues have not.

"I've asked twice for the council member who represents us to meet with her district and her response to me was to give her the district's availability. That's very unrealistic," said King Albert. "We have a council member who's sued the city and who has gained thousands of dollars at the expense of the city, and now you're sitting on the council and don't want us to voice our concerns?"

The distracting drama has taken money and attention away from the real issues. One of those, a tumultuous relationship with former Police Chief Tom Murray.

After serving as interim chief for about four months, Murray was hired as chief in November of 2016. Four months later, in March of 2017, the city council voted to terminate his contract. Former City Manager Auburn Ford said Murray was let go for being "insubordinate". Murray's attorneys threatened to sue the city.

Then, in May of 2017, a flurry of departures: the police captain quit, the city's operations manager left, and the council voted Ford out, replacing him with current city manager Leslie Steele.

Only days after Ford was fired, Murray was reinstated in early June. That only lasted two months. In August, Murray resigned and wouldn't openly say why. He declined to do an interview for this story.

King Albert says, "It's definitely an indication of instability and it didn't just get this way."

Another issue: Midway's Community Redevelopment Agency. A proposed ordinance to get dissolve the CRA was recently tabled, but Midway leaders like Steele are still looking to get rid of it.

"We need to have a true study of what areas are blighted in our neighborhood. Let's not guess anymore," said Steele. "We're not even able to put funding into our CRA fund. We've never put one dime in it, not one dime. We don't even have a bank account that is required. You want CRA dollars to repave roads and to put in infrastructure? You need to have a plan."

Midway's leaders urge citizens to be patient, saying solutions are coming. In the meantime, residents have proposed a few other ideas: a recall of city officials, changing the language of the city charter or dissolving the city entirely to become part of the county again.

"There's no way the city can move forward with the leadership as it is," said King Albert.

Since the Home Rule was ratified by the Florida Legislature in 1973, these actions are done by special act of the legislature or by a referendum requiring a vote of from the citizens.

"At any point in the process it can be challenged," said John Williams.

Williams served as Midway's city attorney for eight years. He saw a group try to dissolve the city, but ultimately, they were unsuccessful. According to information on the Florida League of Cities' website, only 10 municipalities in all of Florida have been dissolved since the ratification of the Home Rule.

"You've elected somebody so now you want to remove them and there ought to be some cause. There is a way to do it but it's not set up to be a simple thing to do because the voters have made their choices," Williams explained. "It takes a large group of people, voters to get out. It takes a lot of time and energy and it has to be done in a way that's specifically authorized by the statute and the charter."

If Midway dissolves and is absorbed back into Gadsden County, the county would inherit Midway's more than $337,000 of debt. A lot of that debt is settlements owed to former city managers. Steele says, instead of giving up, she'd rather see city leadership and residents work together to improve.

"You have to be willing to meet me halfway to say, 'hey, I want you to make a difference,'" said Steele. "Hold me accountable, sure enough. I'm going to make mistakes, but pick me up and say 'hey, this is the way that we can do this better.'"

As for the people who live, work and spend every day of their lives in Midway, they say, no matter what route they take, something has to change. What move will that be? Well, even residents still don't know.

"There are some irons in the fire," said King Albert. "It's time to wipe the slate clean and start afresh, start anew. It's unfortunate that people will have to be displaced in order for that to happen, but in order for us to move forward, it's inevitable."

Leslie Steele tells WTXL the city is looking for an expert to help them figure out how to improve the city's CRA in the future. That has to happen before the ordinance to dissolve the CRA will be brought up again.