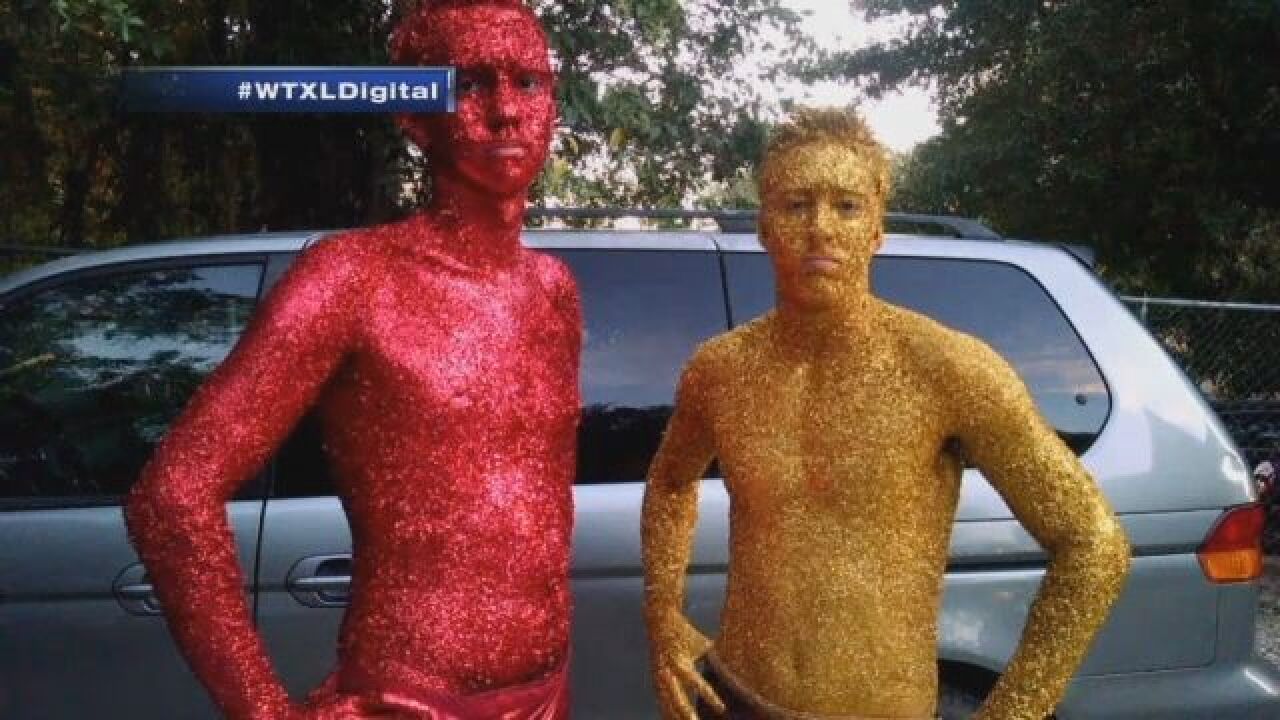 Photo Credit: Axis Graphics
The Garnet and Gold Guys spend about an hour getting ready before each game. Being covered in glitter is dedication.

TALLAHASSEE, FL (#WTXLDigital) - Most FSU fans show their support by wearing garnet and gold. Others go above and beyond by painting themselves. For two fans, they even go a step further than that.

At each home game, two fans go above the rest by covering themselves in not only body paint, but pounds of glitter as well.

Widely known as The Garnet and Gold Guys, two FSU students cover themselves in glitter and transform into symbols of school spirit.

The FSU Student Alumni Association, who funds the glitter and paint, says that about six jars of paint and six pounds of glitter are used for one game.

The Garnet and Gold Guys have been a long-standing tradition through FSU's Baptist Collegiate Ministry (BCM). Each year, two guys are chosen from the BCM to represent school spirit and encourage fans in the stands.

This tradition started in 1998 and has continued to grow. The guys got the opportunity to go to Pasadena for the 2013 National Championship and got to cheer on the Noles in Dallas for the team's 2014 season opener.

Even though they're well-known among FSU fans, they won't tell you who they are. In the eyes of fans, their names are "Garnet" and "Gold."

"It's more about the tradition than it is us," Garnet says. "We're here to support the Noles and support the game."

Even though they say it's not about them, live television and Doak Campbell Stadium's jumbo-trons have seen a lot of them. Gold says that it feels a bit like being Batman, saying that once covered in glitter, it's like he's another person.

Both Garnet and Gold say that even after the game has ended and the glitter is off, they discover that they're still leaving a trail of glitter everywhere they go. Gold says that he will find it on himself weeks, even months after.

Through the trails of glitter and countless photo-ops with fans during the game, these two truly enjoy the experience each week, saying that it's all about cheering on the Florida State Seminoles.

In case you weren't in Doak on Saturday night, here's your chance to see what it was like in the stands.