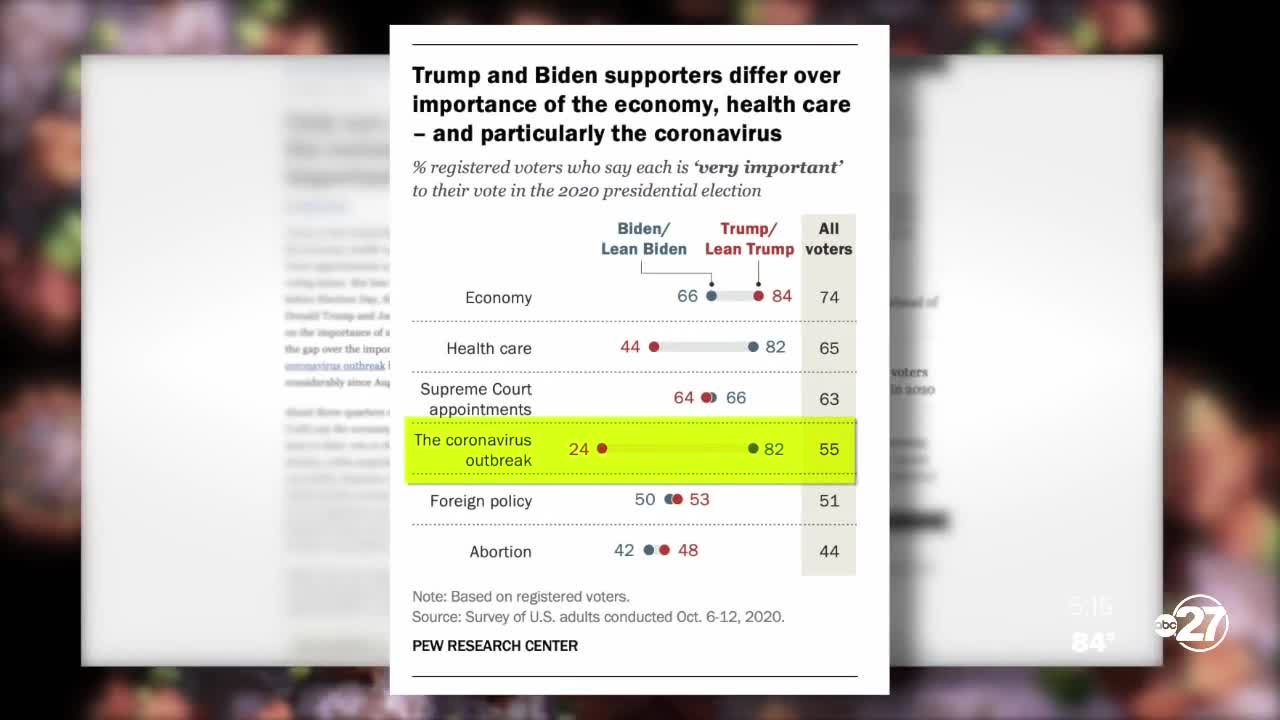 No matter where you live in Florida, COVID-19 has impacted you. Maybe you were stuck indoors for days, lost your job or a loved one. Many voters now say these experiences have become the deciding factor this election season, but it's not making their choice any easier.

No matter where you live in Florida, COVID-19 has impacted you. Maybe you were stuck indoors for days, lost your job or a loved one.

Many voters now say these experiences have become the deciding factor this election season, but it is not making their choice any easier.

Eddie Rivera, a West Palm Beach restaurateur, has no idea who he is voting for in the presidential election.

It is a challenge because when the virus locked down his community, it nearly destroyed his new business, which opened in January.

"We sat here and said, 'We just got rid of the food truck and graduated into a full-scale restaurant,'" Rivera said. "'How are we going to get through this?' The fear was there."

What wasn't there was help, Rivera said.

His restaurant, El Mata Munchies, didn't qualify for any federal assistance. Rivera has had to make do without aid from Republicans or Democrats.

"I did register [to vote]," Rivera said. "I just don't know where we're going to fall."

His indecision is uncommon in this part of the state. West Palm Beach saw some of Florida's most stringent COVID-19 protections. The result, a polarized electorate.

At weekly Trump gatherings, high above a portion of Interstate 95, it's not uncommon to find pandemic deniers like Cindy Falco.

Despite scientific evidence to the contrary, she believes COVID-19 is little more than the flu. She said Democrats are hyping the virus to take down the president.

"They're still trying to do a fear factor," Falco said. "The president got it. He's healed from it. We've got better medicines because of it. We don't need a vaccination, and now they want to press the issue more."

Pamela Fix is more reserved in her comments about COVID-19. The fellow Trump supporter took issue with mandated virus regulations, however.

"I feel for everyone that wasn’t able to work," said Fix. "We're Americans, and we should be able to make our choices on what we do."

In stark contrast, the area's Biden's backers tell us science should come first.

Michelle Sylvester was frustrated with the federal government's handling of the deadly illness, especially after she had a COVID-19 scare earlier this year. Testing wasn't what it should have been, Sylvester said.

"I took the test," she said. "I had to wait 11 days, 11 days to get a response. To have this turnaround on testing be so long is ridiculous."

The partisan divide on the virus is deep, according to a new survey by Pew Research. Only 24% of Trump supporters rank COVID-19 as a "very important" voting issue versus 82% of Biden's.

Both candidates are offering different takes on the pandemic.

Biden wants free testing for all Americans, to hire 100,000 contract tracers and more use of the Defense Production Act. It allows presidents to tap private manufactures to create needed supplies.

Trump is largely running on his performance, promoting economic recovery, limiting federal mandates on things like masks, and promising a vaccine, fast.

The platforms haven't made it any easier for Rivera to make a decision. He expects it will come down to the ballot box.

"It’s probably going to be one of those do or die moments right there at the cutoff time, Nov. 3," Rivera said.