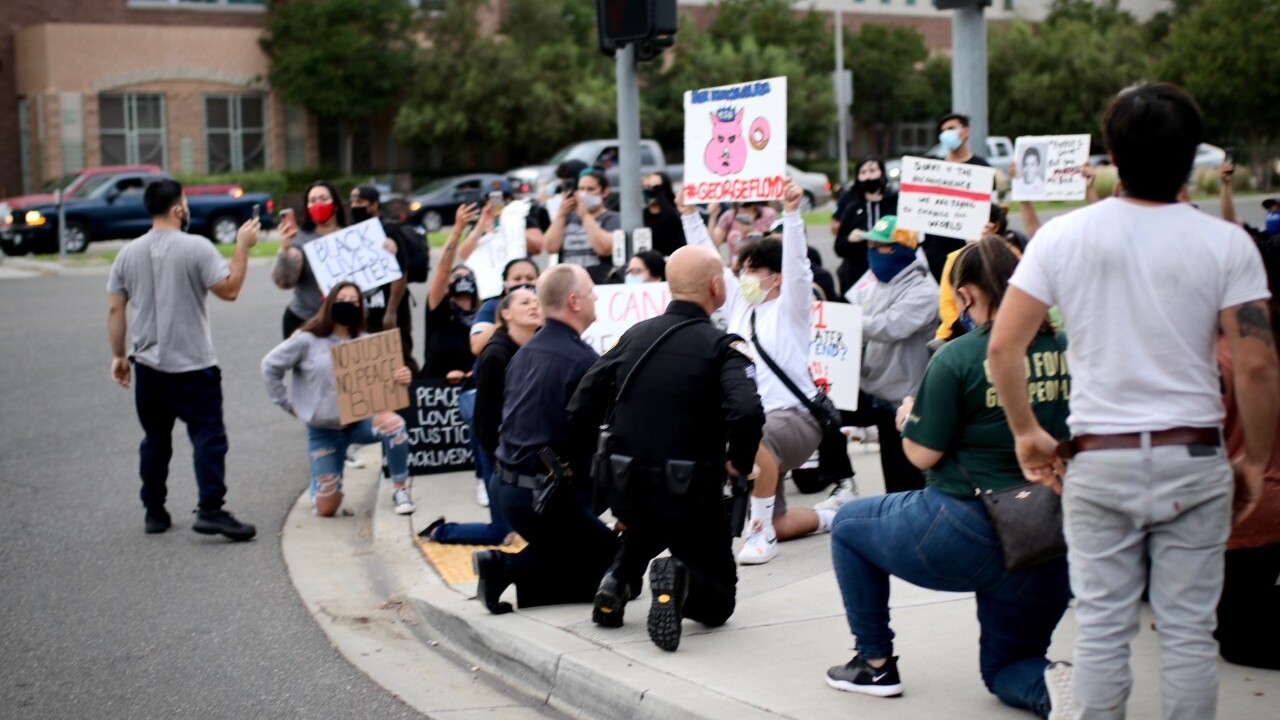 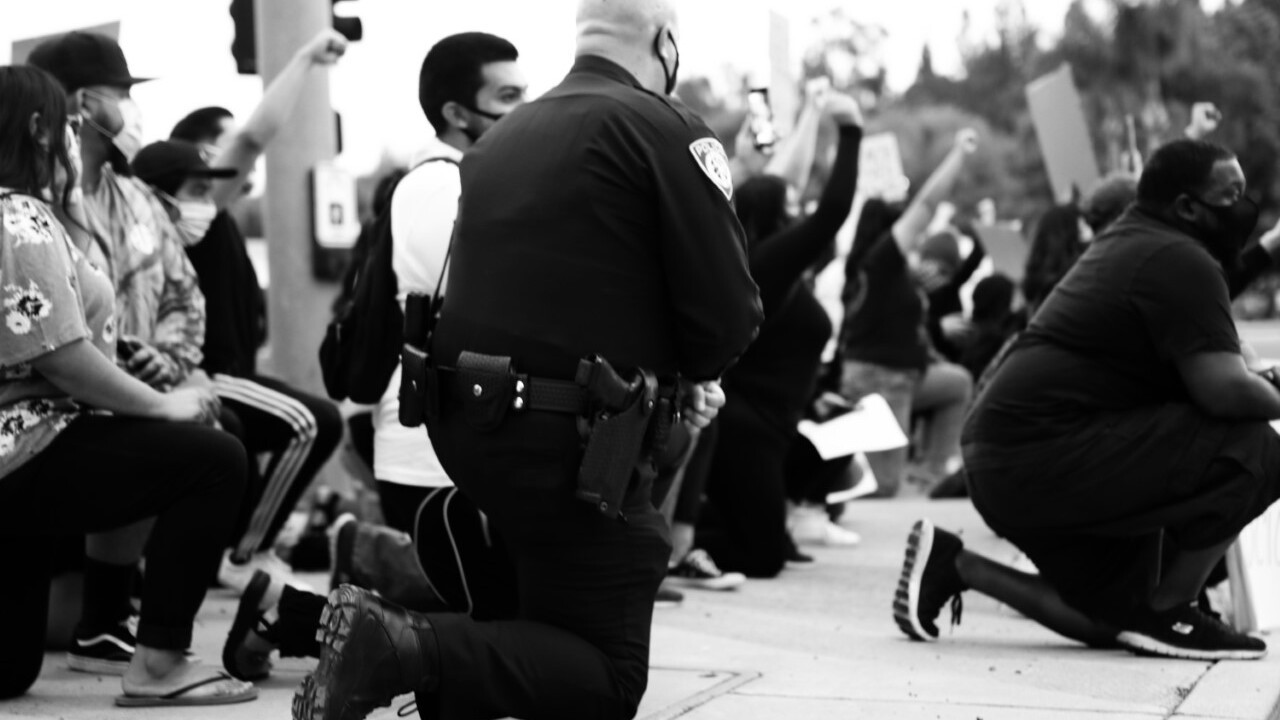 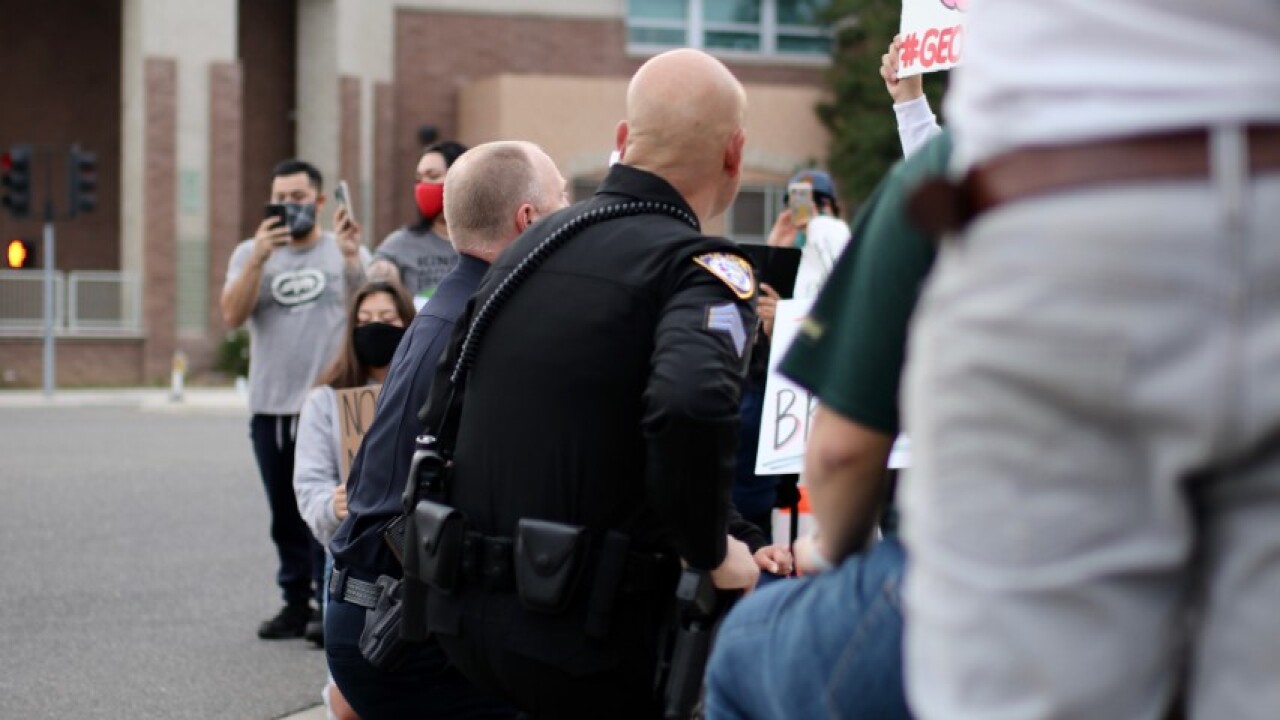 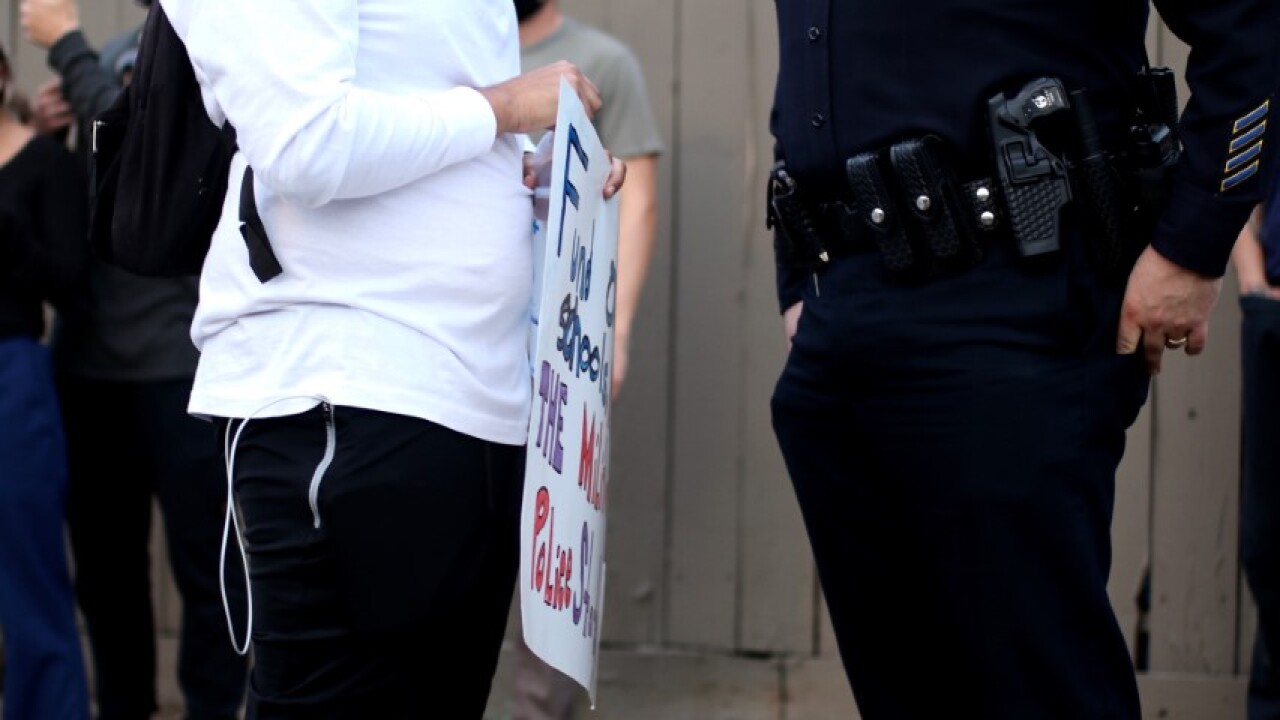 In a display of solidarity with protesters, officers in Escondido, California officers were seen taking a knee with protesters during a demonstration against police violence on Monday.

Photos showed the officers alongside protesters demonstrating against racism, police brutality, and calling for justice for George Floyd, a black man who died in police custody in Minneapolis.

Long-time resident Vanessa Reyes attended the demonstration which happened outside of Escondido Police Department headquarters. She captured the profound moment in a series of photos she later shared with 10News.

The mother of four said she wanted to document the protests for her children, ages 7- to 22-years-old. Not knowing what to expect, she decided to keep her children home while she snapped images of the demonstration.

“I went out there to support the black community and take pictures because I really want to have pictures for my kids to show them this is going to be history, this is real, this is what’s going on.”

Reyes described the demonstration as peaceful and emotional, though some times rowdy.

“The younger kids, maybe like the 20-25 year old’s, they were very, very involved and wanted to be heard, and the chief of police was willing to let them be heard," said Reyes. “Everybody just wanted to be heard and there was so much emotion and the Escondido Police sat there and listened.”

At one point during the protest, Reyes said the crowd, comprised of people of various races, moved towards the police skirmish line.

“When we first got there all the officers were across the street, then all of a sudden the protesters moved towards the officers," said Reyes.

The tense situation was de-escalated when demonstrators struck a conversation with an officer.

“A group of protesters got together and asked the officers if they wanted to take a knee and have a moment of silence for George Floyd and they didn’t hesitate.”

Reyes began taking photos to capture one of San Diego's most powerful moments of these demonstrations that saw a weekend marred by violence and riots across the county.

The officers, dressed only in their regular uniforms, joined the crowd.

“That moment was extremely emotional. You could tell that they [officers] were very genuine and you could tell they really want to make peace and everything better for us.”

Unlike some of the chaotic confrontations witnessed in other parts of the country, Reyes said demonstrators and police officers were respectful of each other, and that the police chief was actively encouraging the crowd to share their voice.

“Officers tried to ask everybody what could they do.”

The scene was similar to a display caught on Sunday in downtown San Diego, where protesters exchanged fist bumps and handshakes with officers. Other moments of unity between police and demonstrators have been captured around the nation.

In a statement, an Escondido Police officer said:

"Last night I, as well the citizens of Escondido were witness to a peaceful, passionate, justified protest. I want to thank our community for your powerful display of protest, in the peaceful yet profound manner it was delivered.

I witnessed 'the few' agitators that attempted to hijack the event with violent and destructive means, met by 'the many' of our community members, protest groups and participants, who thwarted all efforts demanding peace and civility.

For this I extend my deepest gratitude. Thank you for supporting us as we were doing our best to support you. We hear you, we stand and or kneel with you and through these difficult times we will not wavier in our mission to serve and protect you.

I truly believe it is you, the people, that make this the City Of Choice!"

Protests across the county and around the nation began this week after video surfaced showing a Minneapolis officer kneeling on Floyd's neck for nearly 10 minutes. Floyd's death while in-custody sparked nationwide calls for police reform.