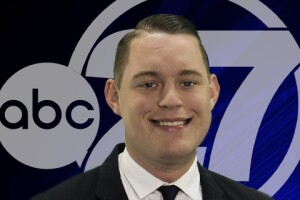 Nathan Dean was hired by WTXL in August 2019 as a multimedia journalist. He earned his Bachelors in Communication with a focus on Multimedia Journalism from the University of North Florida in August 2019.

Nathan is also familiar with the Tallahassee area as a Florida State sports fan. He also received his Associate of Arts degree from the Tallahassee Community College in August 2017.

Nathan Dean was born in Douglasville, Georgia but was raised in Middleburg, Florida. Nathan found his passion for news as a news anchor at Middleburg High School and traveling to San Diego, California to help his high school place at the Student Television Network Convention in 2015.

He then gained experience with sports media through multiple internships in Jacksonville during his time in college.

During his time at UNF as an Osprey, Nathan worked as a broadcast reporter, news anchor and hosted his own sports radio talk show for UNF Spinnaker Radio. Nathan's proudest moment is interviewing Ian Rapoport from NFL Network.

Most of Nathan's family is Filipino as his grandmother was born and raised in Manila. He is a huge foodie and says that siopao is better than lumpia.