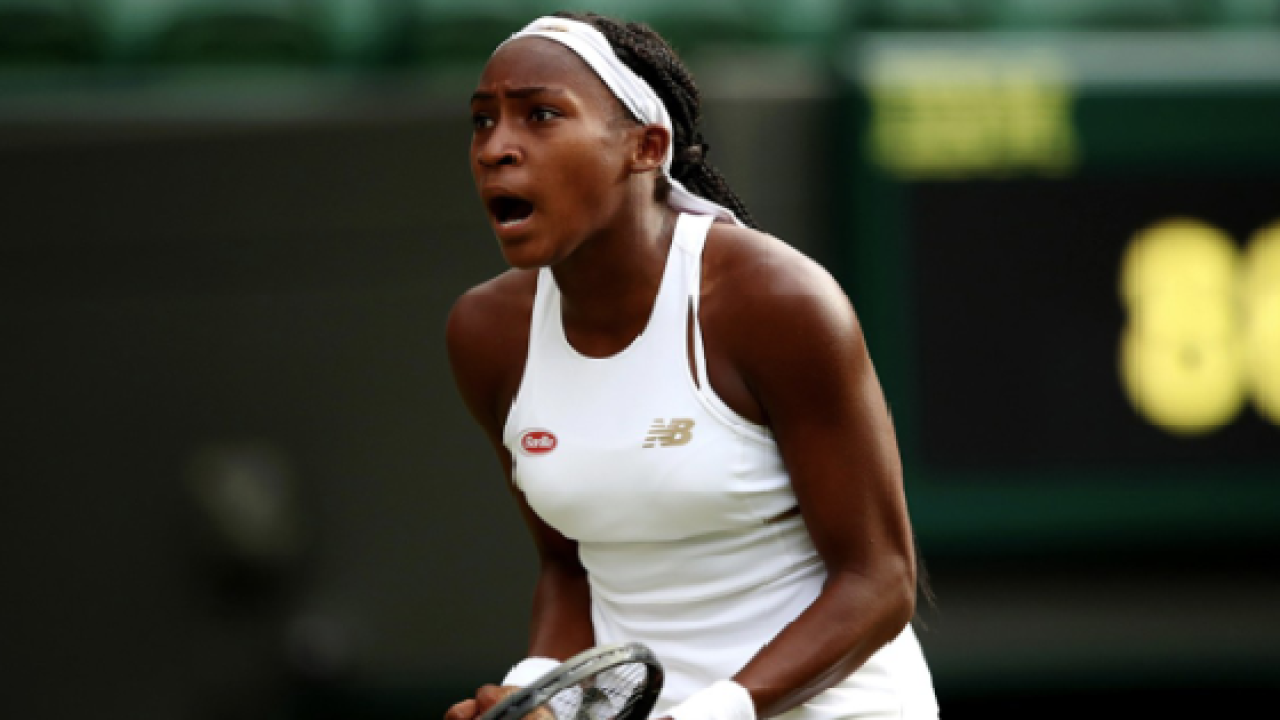 WIMBLEDON, England (AP) — The Latest at Wimbledon (all times local):

After coming through qualifying and then upsetting five-time champion Venus Williams in the first round, the 15-year-old Gauff extended her stay at the All England Club by dispatching former semifinalist Magdalena Rybarikova 6-3, 6-3.

Gauff is the youngest player to come through qualifying for Wimbledon in the Open era but showed her maturity once again in a match played under the new roof on No. 1 Court. She never faced a break point and had only 10 unforced errors compared to 24 for Rybarikova.

Last year's men's finalists moved into the third round at Wimbledon within minutes of each other.

Moments after Kevin Anderson converted his second match point against Janko Tipsarevic with an ace on No. 2 Court, Novak Djokovic wrapped up his straight-set win over Denis Kudla on Centre Court.

Djokovic beat Anderson in the 2018 final for his fourth Wimbledon title, and they could face each other in the semifinals of this year's tournament.

Coco Gauff's second-round match at Wimbledon was moved to No. 1 Court, a stadium with a roof and lights.

The 15-year-old American, who beat Venus Williams in the first round, had been scheduled to play Magdalena Rybarikova on No. 2 Court, but Kevin Anderson's match against Janko Tipsarevic didn't finish until almost 8 p.m.

With Caroline Wozniacki completing her win over Veronika Kudermetova on the bigger court, organizers announced at about 7:20 p.m. that the Gauff match would move there.

The roof on No. 1 Court, which is new this year and was used for the first time on Tuesday, was closed before the Gauff match started.

The youngest male player at Wimbledon is into the third round.

Eighteen-year-old Canadian Felix Auger-Aliassime beat Corentin Moutet of France 6-3, 4-6, 6-4, 6-2 on No. 3 Court to extend his debut appearance at the All England Club. On Monday, he became the first male player born in the 2000s to win a Grand Slam match.

Widely viewed as one of the most promising talents on the men's tour, Auger-Aliassime missed the French Open with an adductor injury but reached the final on grass at Stuttgart and the semifinals at Queen's in the lead-up to Wimbledon.

Fernando Verdasco came from two sets down to knock Kyle Edmund out of Wimbledon and reach the third round for the first time since 2015.

With Andy Murray not playing singles, Edmund was Britain's highest-seeded player in the men's draw at No. 30. However, he appeared to aggravate an old right knee injury when he slipped on the grass near the end of the third set and needed a medical timeout.

Verdasco reached the Wimbledon quarterfinals in 2013 but had lost in the first round in each of the last three years.

Former finalist Milos Raonic is through to the third round of Wimbledon for the sixth year in a row.

Raonic needed treatment on his left ankle and Achilles when trailing 5-4 in the third set but finished off the win by converting his first match point in the tiebreaker. The Canadian was broken only once in the match as Haase took a 6-5 lead in the first set, but Raonic broke right back. Raonic lost the 2016 final to Andy Murray.

Thomas Fabbiano of Italy also advanced, following up his upset win over Stefanos Tsitsipas by beating Ivo Karlovic 6-3, 6-7 (6), 6-3, 6-7 (4), 6-4. At 40, Karlovic became the oldest man since 1975 to win at Wimbledon by advancing to the second round. The Croatian finished with 38 aces but only forced one break point in the match, which he couldn't convert.

Unseeded Reilly Opelka of the United States edged three-time major champion Stan Wawrinka 7-5, 3-6, 4-6, 6-4, 8-6 at Wimbledon to reach the third round of a Grand Slam tournament for the first time.

The 63rd-ranked Opelka earned the only service break of the fifth set in the last game, helped by four groundstroke errors from Wawrinka, who was seeded 22nd.

This was only the sixth Grand Slam match of the 21-year-old Opelka's career. He defeated John Isner in the first round of the Australian Open in January.

Wimbledon is the only major tournament Wawrinka hasn't won.

Serena Williams and Andy Murray will make their debut as an all-star pairing by facing Andreas Mies of Germany and Alexa Guarachi of Chile in the first round of mixed doubles at Wimbledon.

The draw for mixed doubles was held Wednesday.

Williams, who owns 23 Grand Slam singles titles, and Murray, who owns three, are as high-profile a team as could be. He is limited to playing doubles at the moment as he returns from an operation for a hip replacement.

Eighth-seeded Elina Svitolina advanced to the third round at Wimbledon after Margarita Gasparyan had to retire with a leg injury in the second set.

Gasparyan had been on the verge of an upset, two points from the match at 5-4 in the second, but Svitolina held and her opponent was then injured after delivering a serve at 0-15 in the next game. She clutched her left thigh in pain and then remained lying on the baseline for several minutes getting treatment from physical therapist, with Svitolina also coming over to bring her opponent water.

Gasparyan, who has had three surgeries on her left knee since her last Wimbledon appearance in 2016, eventually got back up but was broken and then retired during the next game.

It's only the second time in eight appearances that Svitolina has reached the third round at the All England Club. Her best result was reaching the fourth round in 2017.

Azarenka could face former No. 1 Simona Halep in the third round.

American teenager Coco Gauff will try to follow up her upset win over Venus Williams with another victory in the second round at Wimbledon.

The 15-year-old Gauff will face Magdalena Rybarikova on No. 2 Court at the All England Club on Wednesday.

Gauff would break inside the top 200 in the WTA rankings with a victory, having already become the youngest player since 1991 to win a match at Wimbledon.

Also, defending champion and No. 1 seed Novak Djokovic will face Dennis Kudla of the United States for the first time. Djokovic is seeking a fifth title at Wimbledon and his 16th Grand Slam trophy in all.