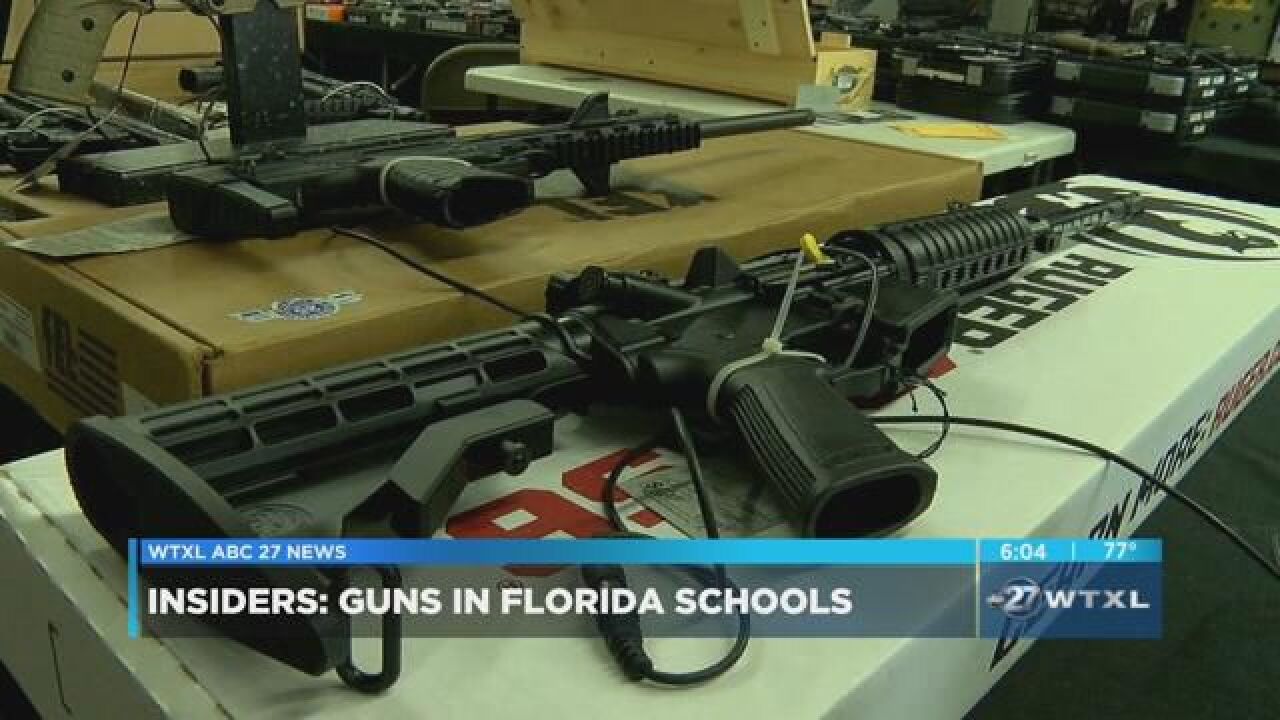 TALLAHASSEE, Fla. (WTXL) - How would you feel if someone at your child's school carried a gun?

A group that keeps track of school shootings says, since 2013, there have been at least 290, an average of almost one school shooting a week. A school shooting is classified as any incident where a gun is fired on school grounds, whether or not someone is hurt/killed.

This issue is hitting home for folks in Florida after a 19-year-old shot and killed 17 people in Parkland.

That fear has students, parents, school employees and lawmakers desperate for solutions, no matter how controversial they appear.

Florida lawmakers are considering a proposed bill that would let some school employees have firearms. Senate Bill 1236 has now been withdrawn from consideration by a senate committee, but the bill could still move forward.

"This could be the difference between whether we have an incident or we have a massacre," said Sen. Dennis Baxley (R-Ocala.) Baxley sponsors SB 1236, simply called "School Safety."

Right now, it's illegal to carry a gun on school property in Florida. This bill would allow school officials to let trained armed volunteers like teachers bring their concealed carry weapons into the classroom.

"It seems unfair to me that we ask school administrators and teachers to be responsible for the safety of our children, yet we totally eliminate any opportunity for there to be an armed response to an armed intruder," said Sen. Baxley.

Being responsible means not letting just anyone bring a gun into a school. Under SB 1236, employees would have to get approval from the principal or district superintendent before carrying a gun on campus. Sen. Baxley believes having guns in classrooms could stop a violent situation sooner.

"There's always a time delay, particularly when you get to more rural schools," said Sen. Baxley. "It might be 45 minutes before someone could actually be there to help you.

"What we find with studying these permit holders is that they don't shoot people. What they do is demonstrate to a violent person that they will resist and they leave. So we avoid a violent conflict," said Sen. Baxley.

Bills similar to SB 1236 have been filed in four other states, according to the Giffords Law Center to Prevent Gun Violence. Laura Cutilletta, the center's Legal Director, says the idea of a "hero" stopping a shooter sounds good in theory, but rarely works in real life.

"The Department of Homeland Security and the FBI have advised that, in an active shooter situation, untrained civilians should not engage the shooter," said Cutilletta. "They tend to put themselves or others in more danger. In the past, civilians trying to respond to such events have missed and injured innocent bystanders."

It's just not just about safety; it's also about cost. Sen. Baxley says arming teachers that are already on the payroll is cheaper than hiring special armed guards. Cutilletta worries it's not as effective.

"When you're a law enforcement professional, you spend every day focused on keeping the public safe. If you're a teacher or a principal, your main job is something completely different. So to arm them and expect them to do the job of a law enforcement officer is completely nonsensical," said Cutilletta.

We reached out to local school districts to see what they think about the bill. Gadsden County Superintendent Roger Milton tells WTXL he would not be comfortable with anyone except law enforcement carrying a weapon at his schools. He worries a gun could get into the wrong hands if it's not properly secured.

We also asked parents what they thought about this issue. Dozens left comments on our Facebook page.

Kimberly Bartlum wrote: "Why is this a debate? Armed guards should have already happened and absolutely teachers should be able to protect our children and themselves."

Rose Wood says, in part: "Armed? No. What needs to happen is funding and talks against bullying, isolation, and hate."

"More guns in the street is never the answer," said Florida resident Natasha Goodley. "If you look at the countries that do not experience the number of mass shootings we do, they have very strict gun laws. The more guns that we have will not protect us."

Sen. Baxley admits there's a long way to go before a bill like SB 1236 can pass. First, he says he's focusing on a bill that would let people concealed carry at churches and other places of worship. If that passes and goes well, he hopes it might ease some of the concern around letting guns on school campuses.

If you have a story idea for the Insiders, you can email us at abc27news@wtxl.tv, attention "The Insiders."