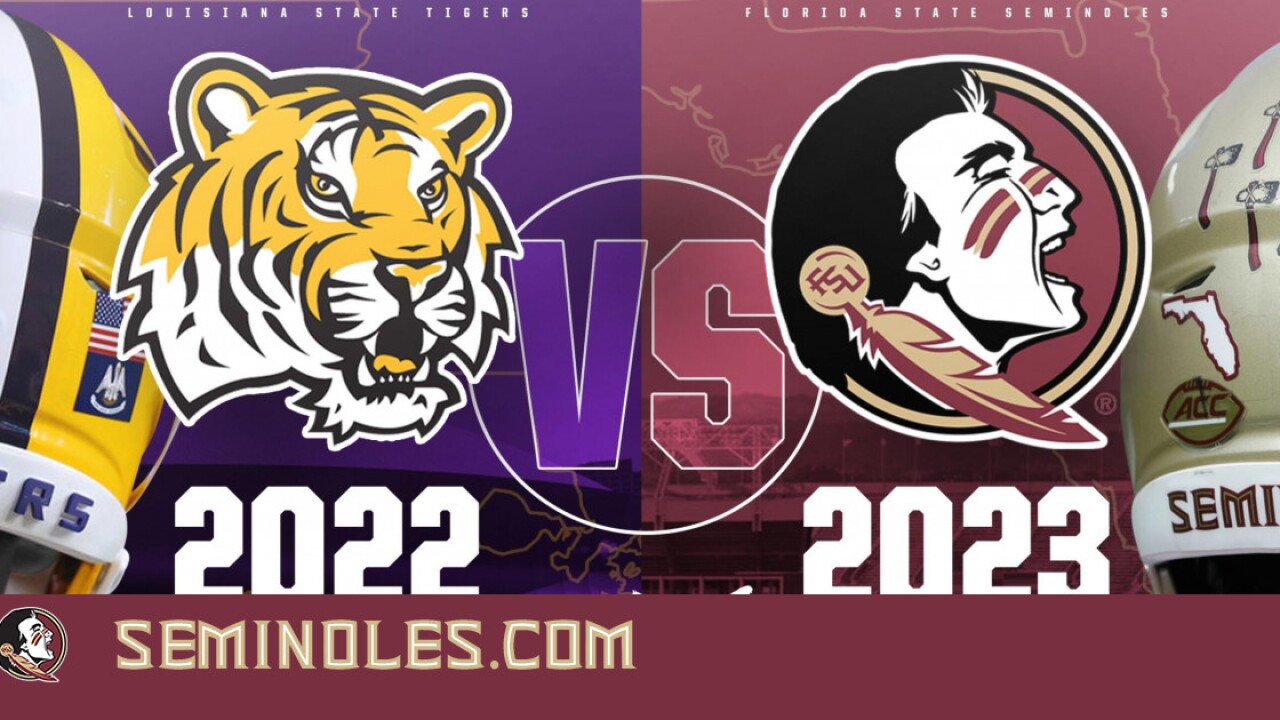 TALLAHASSEE, Fla. — Florida State has added matchups against LSU to its 2022 and 2023 schedules, it was announced Tuesday.

The two teams will meet at the Mercedes-Benz Superdome in New Orleans on Sept. 4, 2022, and at Orlando’s Camping World Stadium on Sept. 3, 2023.

“I’m excited about this series,” head coach Mike Norvell said. “Florida State has a rich tradition in Louisiana, the home of many former Seminoles including Warrick Dunn and Travis Minor, and all three of our national championship teams had at least one player from Louisiana. It continues to be an important area for us now. We added two players from Louisiana in our first signing class, and it will be great for them and other future Noles to be able to play back in their home state. This series matches two of the iconic brands in college football, and I know our fans will have a great time in New Orleans and Orlando. I want to thank our administration for all their hard work on this and for continuing to pursue first-class experiences for our student-athletes.”

Florida State leads the all-time series with LSU 7-2 and has won four straight against the Tigers. The series dates back to the 1968 Peach Bowl, but the 2022 game matches the teams for the first time since 1991.

FSU and LSU have played seven times in Baton Rouge, once in Tallahassee and once in Atlanta. The Seminoles are 73-71-6 all-time against current members of the SEC.

“We are very pleased to officially announce these games, which will provide great trips for our fans,” Director of Athletics David Coburn said. “The two games will also allow our coaching staff to show off our program in areas where we recruit heavily, and this adds another Power 5, out-of-conference opponent to our schedule. I would like to thank the staff at LSU with whom we worked hand-in-hand to make this happen. I also want to thank our partners at the Sugar Bowl, Florida Citrus Sports and ESPN Events for their help and support in making this high-profile series happen.”

“LSU and Florida State are two of college football’s most iconic brands, and we look forward to renewing this series,” Pete Derzis, ESPN senior vice president of college sports programming and ESPN Events said. “When scheduling neutral-site games, our goal is always to provide fans and viewers an incredible matchup, and we feel we’ve done exactly that with these highly-anticipated events.”

The Seminoles are 8-2 in the Superdome, including a victory over Virginia Tech in the 2000 Sugar Bowl that earned FSU its second national championship and completed the first wire-to-wire No. 1 season in Associated Press poll history. FSU owns a record of 36-12 in NFL stadiums since 1984.

“We’ve been working on this for a few years,” Sugar Bowl CEO Jeff Hundley said. “The stakes are high, but with LSU and FSU we have two nationally-recognized programs within driving distance of New Orleans. We’re expecting a big and enthusiastic crowd here for Labor Day Weekend in 2022. It should be fun.”

Florida State is returning to Camping World Stadium for the first time since defeating No. 11 Ole Miss to start the 2016 season and is 9-0-2 all-time in Orlando. The Seminoles’ only other season-opening game in Orlando was a 70-26 win over Duke in 1995.

“We are so excited to bring yet another thrilling kickoff game to Orlando, and we look forward to hosting college football fans from around the globe for this incredible matchup,” Florida Citrus Sports CEO Steve Hogan said. “Events like these have a profound impact on the Central Florida community, and we can’t wait to show the student-athletes, coaches, families and supporters of our longstanding partners in Tallahassee and Baton Rouge what makes Orlando one of the country’s top neutral-site destinations.”

With the LSU series announcement and an annual matchup with Florida, Florida State has secured the majority of its non-conference opponents for the next four seasons. In 2021, the Seminoles open with Notre Dame at home on Labor Day and will host UMass and Jacksonville State. The 2022 schedule also includes Louisiana in Tallahassee, and 2023 features a home game against Southern Miss.

Season tickets for the 2020 campaign, which begins Sept. 5 against West Virginia in the Chick-fil-A Kickoff Game in Atlanta’s Mercedes-Benz Stadium, can be purchased at Seminoles.com [seminoles.evenue.net] or by calling 888-FSU-NOLE (888-378-6653).