LONDON (AP) — The Latest on an incident at a subway station in London (all times local):

British Prime Minister Theresa May will chair a meeting of the government’s emergency committee in response to a subway fire that police have called a terrorist incident.

May tweeted Friday: “My thoughts are with those injured at Parsons Green and emergency services who are responding bravely to this terrorist incident.”

Police say several people have been injured in the rush-hour incident on a Tube train at Parsons Green station in west London.

Britain’s official threat level from terrorism stands at “severe,” the second-highest rung on a five-point scale, meaning an attack is highly likely.

London’s Metropolitan Police says a fire on the London subway has been declared a “terrorist incident.”

The force says counterterrorism officers are leading the investigation into the incident at Parsons Green station, where “a number” of people have been injured.

Passengers reported an explosion in a carriage of the train shortly after 8 a.m., during the morning rush hour. Several people appeared to have burn injuries.

Police say it’s “too early to confirm the cause of the fire, which will be subject to the investigation that is now underway by the Met’s Counter Terrorism Command.”

British Foreign Secretary Boris Johnson says people should “keep calm and go about their normal lives” as emergency services respond to an incident at a London subway station.

Johnson says it would be “wrong to speculate,” and that police and transit authorities “are on it.”

The police, ambulance and fire services say they are responding to an “incident” at Parson’s Green station in southwest London. Passengers reported people fleeing in panic after reports of an explosion. 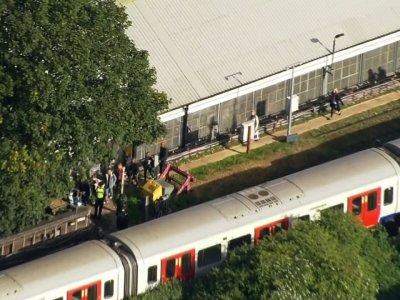 Police in London declared the reported explosion on a London subway train a ‘terrorist incident.’ It’s unclear if an actual explosion injured anyone, but at least one witness says some people may have been trampled. (Sept. 15)

London firefighters are leading passengers off a train along elevated subway tracks near where a reported explosion sent commuters fleeing in panic. Video from the scene showed people picking their way along the tracks.

The evacuation comes after police responded to “an incident” at the Parsons Green station during Friday rush hour.

Photos taken inside the District Line train show a white plastic bucket inside a supermarket shopping bag. Flames and what appear to be wires can be seen. Witnesses said commuters fled the station in a panic. London ambulance services said they had sent multiple crews to the scene, and police advised people to avoid the area.

A commuter whose train had just left the Parsons Green station in southwest London says there was panic after a woman on the platform saw what appeared to be an explosion. Richard Aylmer-Hall said he saw several people injured, apparently trampled as they fled.

“There was a woman on the platform who said she had seen a bag, a flash and a bang, so obviously something had gone off,” he said. “Some people got pushed over and trampled on, I saw two women being treated by ambulance crews.” He said he did not believe anyone was hurt by the actual device.

The London ambulance service said multiple crews had been dispatched.

Police confirmed the incident Friday morning. Few details were released as emergency services rushed to the scene. The station was closed.

The incident happened during rush hour when the Underground system is crowded. Passengers were advised to use alternate routes.

London Fire Brigade said they were called to the scene at 8:21 a.m. Friday. The London Ambulance Service said it was working with police on the scene.

London’s Metropolitan Police and ambulance services are confirming they are at the scene of “an incident” at the Parsons Green subway station in the southwest of the capital. The underground operator said services have been cut along the line.